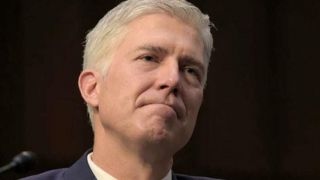 The Supreme Court has agreed to hear the first major test of the scope of executive power to protect national security since Neil Gorsuch joined the Court as associate justice.

Monday morning, the high court announced it will determine the legality of Donald Trump's executive order establishing a Muslim travel ban when it reconvenes the first Monday in October.

In the meantime, the high court allowed parts of the ban to go into effect. Trump can now exclude foreign nationals who lack any bona fide relationship with a person or entity, such as a school, in the United States.

The high court's majority ruling was signed "per curiam" (by the court), meaning that no justice took responsibility for writing it. Three justices -- Clarence Thomas, Samuel Alito and Neil Gorsuch -- dissented from the majority ruling, saying they would have upheld the exclusion of everyone covered by Trump's ban without limitation. Gorsuch's dissent, while perhaps not unexpected coming from a person who obediently defended torture, warrantless surveillance and runaway executive power under the Bush administration, portends a far-right tilt for the court's newest justice.

Trump's initial travel ban, issued by executive order on January 27, was subsequently struck down by lower courts. On March 6, Trump issued a second, slightly narrower executive order (EO). It said that nationals of six predominantly-Muslim countries "present heightened risks to the security of the United States" and some of those who have entered the US through the immigration system "have proved to be threats to our national security."

The EO directed that the entry of nationals from the six countries be "suspended for 90 days from the effective date" of the order, to give the administration time to establish "adequate standards ... to prevent infiltration by foreign terrorists."

Two federal appellate courts stayed the implementation of the ban on travelers from the six Muslim-majority countries -- Iran, Libya, Somalia, Sudan, Syria and Yemen -- but on different grounds.

In May, the Fourth Circuit ruled in a 10 to 3 decision that the ban on nationals from these countries violated the First Amendment's Establishment Clause because it was motivated primarily by a desire to exclude Muslims from the United States, not by considerations of national security. The appellate court wrote that the EO "drips with religious intolerance, animus and discrimination," citing Trump's campaign statements calling for a "Muslim ban."

Trump "expressed anti-Muslim sentiment" during the presidential campaign, Chief Judge Roger L. Gregory wrote for the majority. It is entirely plausible, Gregory added, that the EO's "stated national security interest was provided in bad faith, as a pretext for its religious purpose."

The Ninth Circuit, on the other hand, didn't reach the constitutional issue. A unanimous three-judge panel concluded earlier this month that the ban on nationals from the six countries, the suspension of all refugee admissions for 120 days, and the cap of 50,000 on refugees for 2017 exceeded the president's authority under the Immigration and Nationality Act (INA).

As the panel stated, "the [EO] does not provide a rationale explaining why permitting entry of nationals from the six designated countries under current protocols would be detrimental to the interests of the United States," which is what the INA requires before the president can "suspend the entry of all aliens or any class of aliens" to the US.

Moreover, the panel wrote, the EO "does not tie these nationals in any way to terrorist organizations within the six designated countries" or "identify these nationals as contributors to active conflict or as those responsible for insecure country conditions. It does not provide any link between an individual's nationality and their propensity to commit terrorism or their inherent dangerousness."

"National security is not a 'talismanic incantation' that, once invoked, can support any and all exercise of executive power," the panel added.

Related Topic(s): Immigration; Justice Neil Gorsuch; Muslim Ban; Muslim Bashing; Right Wing Selling Off America, Add Tags
Add to My Group(s)
Go To Commenting
The views expressed herein are the sole responsibility of the author and do not necessarily reflect those of this website or its editors.