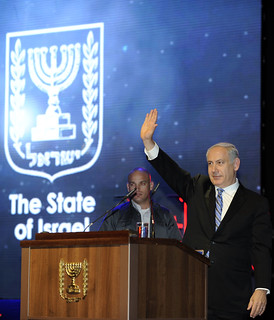 Benjamin Netanyahu
(Image by Masa__Israel)   Details   DMCA
>
HOW DOES a football club choose its team?

The simple way is the usual one: each side has a manager, who chooses his team. No problem.

Now the Israeli government has hit on a new way: Our manager appoints both our team and the adversary's team. Simplifies the matter.

I wonder if this method could not be refined. For example: each side's manager chooses only the team of the other side. Could turn out interesting.

Yet another way would be for the betting mafia to choose both teams. This would maximize profits in the spirit of modern market forces.

SERIOUSLY, THE claim by Binyamin Netanyahu that he has a right to pick and choose the Palestinian government is rather astonishing.

All the important Palestinian political parties have agreed on a new government coalition. This is a negative coalition: all the parties agree not to have their own members in the government. The government is composed of non-party "technocrats." I hardly know a single one of them.

Netanyahu should be happy. No member of the evil, terroristic, anti-Semitic Hamas is included.

But then, the fertile mind of Netanyahu invented a new gimmick. True, no Hamasniks in the government. But the government is supported by Hamas.

Terrible! Intolerable! If Hamas "supports" somebody, he must surely be a suicide bomber, a Jew-killer, and, of course, an anti-Semite (though a Semite himself).

Ergo: such a government must be boycotted, not just by Israel, but by the entire civilized world.

If Europe, or even the US, do not agree -- well, it just shows, doesn't it? A bunch of bloody anti-Semites, the lot of them!

AN OLD Jewish question asks, half in joke and half serious: "Is it good for the Jews?"

Whether an earthquake in Alaska or a flood in China, the question invariably arises. Good or Bad?

An event much closer to us, like the setting up of a Palestinian unity government, poses this question far more urgently.

This is not a new question in this context. Already in the early 1950s, two important leaders debated it.

Related Topic(s): Benjamin Netanyahu; Fatah; Hamas; Israel; Palestinian, Add Tags
Add to My Group(s)
Go To Commenting
The views expressed herein are the sole responsibility of the author and do not necessarily reflect those of this website or its editors.