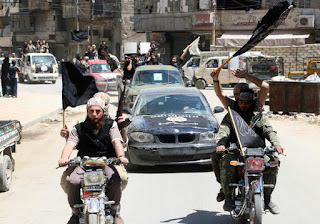 Fighters of al-Nusra front driving through Aleppo 26 May (AFP)

"The President does not have power under the Constitution to unilaterally authorize a military attack in a situation that does not involve stopping an actual or imminent threat to the nation"
-- candidate Barack Obama, December, 2007

The United States has decided to allow airstrikes to defend Syrian rebels trained by the U.S. military from any attackers, even if the enemies hail from forces loyal to Syrian President Bashar al-Assad, U.S. officials said on Sunday.

The United States just went to war with Syria. With the confirmation today that American planes will shoot down Syrian planes attacking US-approved "rebels," the United States is now overtly engaged in another criminal attack on a sovereign country that poses no conceivable, let alone actual or imminent, threat to the nation. This is an act of war.

Please don't try any not-really-war "no-fly zone" or "safe zone" bullshit. As the Commander of NATO says, a no-fly zone is "quite frankly an act of war and it is not a trivial matter".[I]t's basically to start a war with that country, because you are going to have to go in and kinetically take out their air defense capability." Or as Shamus Cooke puts it: "In a war zone an area is made 'safe' by destroying anything in it or around that appears threatening." Inevitably, "U.S. and Turkish fighter jets will engage with Syrian aircraft, broadening and deepening the war until the intended aim of regime change has been accomplished." 1

Does anybody doubt that this is exactly what's intended? Perhaps Obama will soothe the discomfort of his purportedly peace-loving progressive fans with some assurance like: "broadening our military mission to include regime change would be a mistake." He'll be lying, as he was four years ago when he said that about Libya.

As an aggressive, unprovoked war, this is totally illegal under international law, and all the political and military authorities undertaking it are war criminals, who would be prosecuted as such, if there were an international legal regime that had not been undermined by the United States.

As an act of war, to be constitutional, it demands a congressional act of war, or at the very least, congressional authorization under the War Powers Act. Will Obama ask for this? Will any Democratic or Republican congresscritter demand it? Is the Pope a Hindu?

Would it make any difference? Don't forget that Obama completely ignored the War Powers Act, the Constitution, Congress, and his own Attorney General and legal advisers, 2 and went right ahead with a war on Libya, under the theory that, if we pretend no American troops are on the ground (everybody knows there were, and must be 3), it isn't really a war or "hostilities" at all. So, I guess if the Chinese Air Force starts shooting down American planes in American airspace in defense of the Occupy Wall Street movement's assault on the White House, China wouldn't really be engaging in an act of war.

Please don't complain that the last sentence makes no sense. The U.S. is now officially acting as al-Qaeda's air force, trying to force a regime change that everybody knows will result in turning Syria into another jihadi playground, Libya 2.0. This makes sense?

Obama is, in fact, now building on the imperial executive arrogance he demonstrated in the Libyan intervention -- as Bruce Ackerman said, "betraying the electoral majorities who twice voted him into office on his promise to end Bush-era abuses of executive authority" and asserting the president's unilateral authority to make war. Per Ackerman: "Nothing attempted by his predecessor, George W. Bush, remotely compares in imperial hubris." 4

It's impossible to overstate the danger in these executive war-making prerogatives that Obama has now normalized -- with the irresponsible connivance of his sometimes-progressive groupies, who pretend not to know where this leads: "I don't believe at this stage, therefore, if I'm president that we need to have a war powers approval or special authorization for military force. The president has that capacity now," said Mitt Romney in 2012, and every Republican thereafter. 5

It's also quite clear now, that the War on ISIS is a sham, that ISIS was always just a pretext to get the American military directly involved in attacking the Syrian army and destroying the Syrian state. Jihadi horror-show "ISIS" replaced the WMD horror-show "chemical weapons" pretext that Putin so adroitly took off the table in 2013, removing the excuse for the war on Syria Obama was itching to launch then (and earning the lasting enmity of the deep-state neocon cabal). If the U.S. and Turkey wanted to defeat ISIS, they would, besides not sending ISIS arms and fighters, be coordinating their actions with, and not against, the forces who have been most effectively fighting it: the Syrian Arab Army, the Kurds, Iran, and Hezbollah.