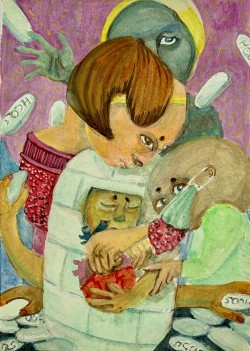 A Presidential Pill Can Be Deadly
(Image by Akemi Ohira)   Details   DMCA
I have a most handsome Pomeranian who arrived quite aggressively, but by invitation, three years ago, to the great displeasure of our then, four-year-old Chi-poo, until then, free to solo herd me with her big brown bedroom eyes - something college girls accused me of having, when I was in high school.

But back to, the Crown Prince, my Pomeranian, clearly self-assured in the extreme, initially tolerating no herding, unless of course, it was his imposition wheeling his will on our somewhat settled trio. Aside from his instantaneous response to any move I make, as if his voluminous high-pitched sounding off somehow adds importance to his desires and expectations of free reign.

Occasionally, I must remind him, in close proximity, momentarily joining him in his acrimony for social distancing, that while he may be allowed to lord it over us, I, keeper of the food chain and keys to his escape mobile, remain King arbiter of his discriminating freedom for monarchal charade over what he considers, perched atop the sofa back - the worldview, that all visible through his myopic sliding doors' monocle, is his assumed annexed turf of the brave, and his alone to rule, notwithstanding Jackson's Southern Magnolias banning his north east exposure.

Some of us experience terrifying events too early to fully comprehend, that frame adult humanity through scarred memories- even when victorious in democratic Warm Springs Georgia - into a twisted Scarlett O'Hara clinched fist stand against ever going without a supremely robed Republican again.

Vulnerable to leaders like Cheney and Wolfowitz herding our survival instinct into forever oil wars, it's understandable after 9/11 many desired to hit back at foreigners who hit us, including those who, here at home, didn't. However, most first responses were channeled through military and civilian service.

Long ago my Chi-poo forgave me for almost squeezing the life out of her, when, seeking a coffee refill, I lowered my recliner. I still remember looking down to see why it wouldn't close and seeing her back half trying to escape before being crushed. To this day, she checks under my writing chair before climbing into my lap - and I never close it, without checking the location of all my paws.

Some of us learn from scares, pain even defeats, how to be more loving, respectful and giving, while others can't save themselves from the character decay of IG retribution.

My Pomeranian was only a year old when in response to his somewhat boorish request, I let him out for a bit of, freedom of expression. Sensing a sudden drop in temperature, I caught a foreboding foreshadowing glimpse among the magnolias' canopies.

In an instant I knew this was worse than a conservative political pretender's painfully pompous presumption of a pussyfooting pundit's press poison pen psyche, pushing a paludism prevarication, as preventive pharma for planet pandemic - playing through.

It was as unexpected as our Derecho, and I had just elected to send my unsuspecting Pomeranian into harm's way, like a president tone deaf and brain dead to almost a hundred thousand American deaths, just for being alive during the age of trumped thinking. We are responsible for all who trust us enough to accept our claim of stewardship in charge, whether pets, children, elderly or electorate.

When debris started hitting me, I realized the sound of my voice calling him to safety was being drowned out by the sudden bad wind beating drums of deception and discord.

Looking down, I saw him racing helplessly, chasing conflicting clarity as the sound of my voice was whipped through the trees, powerless to secure any checks and balances from the laws of nature.

Atop our deck, I waved my arms, desperately hoping to give him the one clear direction he needed to survive. Seeing me, he gingerly climbed the steps as I squatted at the top of them to avoid flying debris. Jumping into my arms, still terrified, we raced for the protection of shelter-in-place.

Once inside, he wouldn't leave my side, and still insists our body contact is his armor of choice - as much as our Chi-poo allows.

Some learn from life's lessons, how to go on despite incompetent apathetic commanders-in-betrayal. Choosing our better angels, we emulate those who've stepped up to both save and enrich our lives, with online encouragement, backyard rides, drive-by neighbors and heartfelt donations of what's needed from those who have it to give.

While arrogance exposes cowardly bullies, angrily electing ignorance dishonors those who've fallen. It's on us to know the difference between wagging tales spun to negate reason, and the common sense to maintain faith in each other.