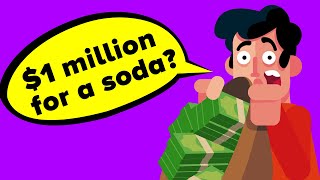 What If The US Dollar Became Worthless? The world is in desperate times and the life as you once knew is gone. We're looking at a new great depression on the horizon, and one of the spots hit most is ...
(Image by YouTube, Channel: The Infographics Show)   Details   DMCA

Disclaimer: The following is my opinion and is not intended as investment advice. I don't know anything about bulls, bears, cycles, resistance, daily, weekly, monthly charting, micro or macro fundamentals and especially indicators like the EROI.

I have been waiting for Silver to take off since 2005 when I was sure the economy and the dollar were going to collapse. [1]

The economy should have gone south in 1980 when the Twins showed up. The twin deficits is a phenomenon wherein both the federal government's balance and that country's trade balance nosedive into negative territory.

Up until 1980 Americans enjoyed the highest standard of living in the Western world because of our ability to import cheap, raw materials (thanks to the CIA) and export refrigerators, cars, airplanes and military hardware to the rest of the world (finished goods).

When the world figured out the game, the Reagan administration embarked upon the greatest export of all: OUR DEBT.

We have been getting away with exporting our debt for over 40 years, but with the reappearance of the Twins and a national debt that since 2010 has been mathematically impossible to pay off, we might be witnessing the final death march of the dollar as the reserve currency of the world. [2]

The recovery when the S&P 500 erased its losses for 2020, accentuating a remarkable stock market comeback, had nothing to do with the expectation of a V-shaped recovery or Trump's claim:

The "America's economy is coming back much stronger than ever anticipated by most people, almost all people, because these numbers were - even the most optimistic people, these numbers are being doubled and tripled over what they thought would be possible,"

84 percent of all stocks owned by Americans belong to the wealthiest 10 percent of households. And that includes everyone's stakes in pension plans, 401(k)'s and individual retirement accounts, as well as trust funds, mutual funds and college savings programs like 529 plans.

87 percent of all stocks are owned by Blackrock and the Hedge Funds.

Negative-yielding debt, 3.6 trillion dollar fiscal stimulus, eviction moratoriums, riots, chaos and the Covid-19 pandemic; we are entering a time that cannot be compared to any financial crisis in history.

The firm (ticker: BLK) now manages $7.4 trillion, up nearly $1.5 trillion from last year, according to its latest earnings report, released on Wednesday. More money flowed into BlackRock funds as stocks rose, boosting the value of existing investments. The S&P 500 Index returned more than 30% in 2019, and the MSCI ACWI, an index that represents the world stock market, gained nearly 27%. [3]

There is significant evidence of price manipulation by Blackrock and Hedge funds at the stock level on critical reporting dates. [4]

The S&P and Dow remarkable recovery has everything to do with Blackrock and the hedge funds that own 87% of all equities. There is significant evidence, but not proof, of price manipulation by Blackrock and Hedge funds at the stock level to buy the stocks the 13% were selling during the Covid-19 pandemic.

The market was about to collapse, manipulation for Blackrock was the only option.

Related Topic(s): Gold Standard, Add Tags
Add to My Group(s)
Go To Commenting
The views expressed herein are the sole responsibility of the author and do not necessarily reflect those of this website or its editors.