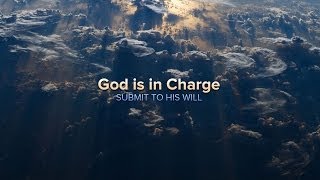 God is in Charge: Submit to His Will
(Image by YouTube, Channel: Christ's Commission Fellowship)   Details   DMCA

Well, here we go again. God is back at work in support of the foreign policy of the United States. In fact, this time around, God has apparently gone so far as to rig the 2016 U.S. presidential election (and you thought it was the Russians!) in order to assure Donald Trump's election. And why did the deity do so? To protect Israel from the bad guys in Teheran.

I know that many readers will find this scenario pretty far-fetched, but we do have it all on good authority -- U.S. Secretary of State Mike Pompeo. Pompeo's revelation came in late March during an interview with the Christian Broadcast Network in Jerusalem. Asked if "it is possible God raised Donald Trump to be President in order to protect Israel from the Iranian menace," Pompeo readily agreed. "As a Christian, I certainly believe that's possible," he said, and then transformed a possibility into a sure thing. He continued, "I am confident that the Lord is at work here when he sees the remarkable history of the faith in this place [Israel] and the work that our [U.S.] administration's done to make sure that this democracy in the Middle East, that this Jewish state, remains."

Note the contradiction here -- the bit about democracy and Jewish state. You can't have a genuine democracy exclusively for one group (Jews) amidst a sea of others (Palestinians). However, if as Pompeo suggests, his God favors democracy and, one might logically assume, was the same God who brought down the white apartheid regime in South Africa, one might ask why should that God let Israel get away with what earned He, She, or Its wrath in apartheid South Africa? Could it be that Mr. Pompeo believes that a combination of Protestant fundamentalists and Zionists lobby in God's realm just like they do in Congress, and that makes the difference? I bet that's it.

Historically, the Secretary of State's faith, expressed in language that claims divine guidance for American foreign affairs, is commonplace. Nonetheless, one can ask, has this faith been justified? That is, has Mr. Pompeo's Protestant fundamentalist God been the unerring and blessed guide He, She, or It is believed to be? Before we can answer that question, we have to establish the criteria upon which we can judge this. At this point I am taking things out of Mr. Pompeo's hands and letting the reader know that I will simply judge the quality of God's alleged guidance of U.S. foreign policy by the resulting body bag count.

Let's begin at the beginning, when foreign policy was really just new world colonial expansion by a bunch of European adventurers. There is an excellent, though unattributed essay that appears in Indian Country Today (10 September 2004) entitled "Manifest Destiny and American Indians." It sums up the religious rationalizations that went along with the appropriation of Indian lands even before the founding of the U.S.: "The English Crown's charters to Cabot, Gilbert and Raleigh [late 15th and 16th centuries] were nearly identical to the Pope's Bulls [15th century] in commissioning expeditions to 'heathen and barbarous lands.' Pilgrim and Puritan [17th century] sermons were replete with references to God's covenant with them, their divine mission, their 'errand into the wilderness ... and manifest destiny.'" That made the whole affair a religiously rationalized one. There is no accurate estimate of the death toll "God's covenant" and "divine mission" helped bring about. However, it had to be in the millions.

This belief in a providential mission was picked up with enthusiasm by those who would lead the United States. Here is how Malcolm Magee, writing for the Oxford Research Encyclopedia, puts it: "The United States has been uniquely God-centered among Western nations, and that includes its foreign policy. From George Washington to the present, all presidents and policymakers have had to consider God in varying degrees either for their domestic audience or because they believed in a version of providential mission in the world. In time, the very idea of the United States became so entwined with the sense of the Divine that American civil religion dominated even the most secular acts of policymakers."

There are some infamous examples of this "providential mission" guiding policy. For instance, in 1899 President William McKinley, a Methodist, allegedly stayed up all night praying to his God to tell him what to do with the Philippines, which had been captured by the U.S. during the Spanish-American War. It would seem that God told him "there was nothing left for us to do but to take them all, and to educate the Filipinos, and uplift and civilize and Christianize them, and by God's grace do the very best we could by them, as our fellow-men for whom Christ also died." A couple points here: first, most of the Filipinos were already Christians are by virtue of 350 years of Spanish imperial rule, and second, McKinley's decision to follow his unerring and blessed divine guide and "do the very best we could" for the Filipinos cost the lives of 200,000 civilians, 20,000 native resistance fighters, and 4,200 American soldiers.

On 2 April 1917 President Woodrow Wilson addressed Congress seeking a declaration of war that would take the U.S. into World War I. He "closed with a statement reminiscent of the German Protestant reformer, Martin Luther's closing lines at the Diet of Worms: 'God helping her [the U.S.] she can do no other.'" Allegedly having no other choice but to follow divine guidance, 116,708 American soldiers proceeded to die on the battlefield.

At the end of World War II, Harry Truman was president. It was at this point that the U.S. was led down the path of assisting in the transformation of Palestine into Israel. Soon American leaders came to believe that a Protestant fundamentalist God demanded that American lives and treasure be used to support a Zionist ideology that was, in practice, ethnically cleansing Palestine of its native population. Pompeo fits right in here. To date, that divine guidance has rationalized United States aid to Israel to the tune of $130 billion and enough modern weaponry to help kill and maim tens of thousands of Palestinians, Syrians, Egyptians, Jordanians and Lebanese.

One could go on with this history, taking in the Cold War notion that the U.S. was a Christian nation at war with "Godless Communism." That bit of good versus evil gave the world the (divinely inspired?) strategy of mutually assured destruction. And then there was George W. Bush, who claimed that God told him to invade Iraq, an alleged piece of advice that subsequently killed as many as 400,000 Iraqis.

Quite frankly, to judge from the behavior of those leaders who, historically and also contemporaneously, claim to act with divine guidance, one must conclude that either they have radically misinterpreted the message from beyond, or that their gods are debased by an endless bloodlust. It is, of course, also possible that there are no gods and these leaders have conveniently duped themselves with a belief that allows them to act as barbarians.

Related Topic(s): Foreign Affairs; Foreign Policy; God Intervention; History; Israel; Racism, Add Tags
Add to My Group(s)
Go To Commenting
The views expressed herein are the sole responsibility of the author and do not necessarily reflect those of this website or its editors.