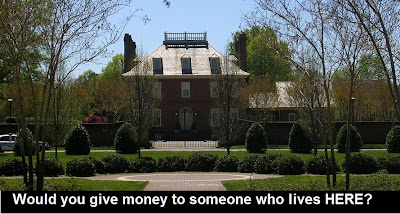 (Image by Unknown Owner)   Details   DMCA
Because Everyone Knows:
Pat Robertson Has More Money Than God!

Copyrighted Image? DMCA
It struck me today that there is no news as to whether or not Rod Parsley got "back the money Satan stole." At the same time, Rick Warren declares a $900,000 shortfall because his congregation didn't pony up enough for Christmas. He got the money he requested - and then some. Satan. The economy. The Obama administration. Immorality. Terrorism. All surefire memes to ask Christian Right life-time members for money. Pat Robertson, however, uses a different tactic to insure Christian Broadcasting Network's coffers are never empty: Pat talks to God.

And poor Pat always seems to forget his tape recorder.

Robertson has been doing this for years and his prognostications have been hysterical: meteors for Orlando, Fl, a deaf God for Dover, PA., Muslims will turn to Christ (2007) and Robertson for President (1988).

But for the new year of 2010, Robertson disappointed stand up comics everywhere because his statement from God, by God, is simply that He's mad at us for passing laws He doesn't like.

Pat Robertson says God is "telling" him there is "a cloud of God's wrath over America" due to "anti-God" legislation.

Of course Robertson says that CBN will be blessed in 2010 because "God takes care of His people." At the same time, "God is going to turn the screws on this nation." On The 700 Club, Pat depicts a God who absolutely delights in making us sinners miserable. Is God a sadist?

Well, if He is, then Pat's viewers are "God-fearing" masochists who enjoy the pain of their bank accounts being bludgeoned regularly.

So in Pat Robertson we have: a wealthy preacher of the prosperity gospel who...talks to God and ...
asks for money.

Rev. Dan Vojir is has been writing/blogging on religion and politics for the better part of ten years. A former radio talk show host (Strictly Books " Talk America Radio Network) and book publisher, Dan has connected with some of the most (more...)
Related Topic(s): Broadcasting; Christian-taliban; God; New World Order; Pat Robertson; People Robertson Pat; Rick Warren; Right Wing Mindset Culture, Add Tags
Add to My Group(s)
Go To Commenting
The views expressed herein are the sole responsibility of the author and do not necessarily reflect those of this website or its editors.