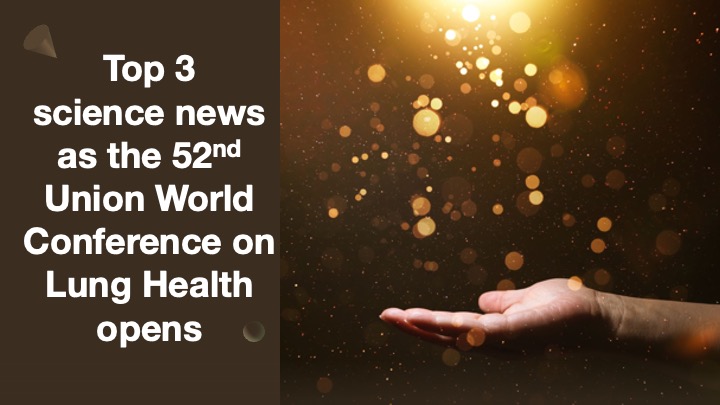 The global (and largest) lung-health conference opened with not one but at least three major scientific announcements. The 52nd Union World Conference on Lung Health was marked with the announcement of three major scientific developments that can potentially impact the global response to tuberculosis (TB), the world's second-deadliest infectious disease after Covid-19.

Researchers from the University of Cape Town in South Africa announced results from their study of TB-positive people carried out in the specially constructed Respiratory Aerosol Sampling Chamber that suggest that coughing, thought previously to be the main means of spreading TB, might not be the primary driver of TB transmission. Instead, tidal, or regular breathing may be a far more significant contributor to the aerosolization of Mycobacterium tuberculosis bacteria.

Lead author of the study, Ryan Dinkele of the University of Cape Town, said that if tidal breathing is a primary driver, or even as important as cough in TB transmission, then symptomatic screening for TB-transmitters may not be useful in slowing the spread of the disease.

"The current approach, which relies on the testing and treatment of passively identified individuals, may not be a reliable response to preventing transmission, as it depends on people feeling sick enough to seek treatment," said Dinkele. "It may also shed light onto why constructing transmission chains is so challenging in high TB-burden settings."

Jayne Sutherland, of London School of Hygiene and Tropical Medicine, reported interim results of the study of a new finger-stick blood test--Xpert-MTB-Host Response-Prototype--developed by Cepheid. The prototype was trialled in a prospective, multi-site study across Gambia, Uganda, South Africa and Vietnam.

Finger-stick blood test can detect TB in less than an hour. It uses finger-stick blood, rather than sputum, which reduces biohazard risk and increases likelihood of diagnosis in individuals who cannot readily produce sputum, such as children and people living with HIV.

The device is the first to meet the WHO target product profile for a triage test for TB, regardless of HIV status or geographical location. The development of a fast and accurate, non-sputum-based point-of-care triage test for TB would have a major impact on combating the TB burden worldwide.

Caroline Williams, of the University of Leicester, reported on the use of masks to see if bacteria could be detected on the mask and therefore could potentially be used to detect infectiousness earlier than with sputum. Face-mask sampling could detect viable bacteria and those patients with higher levels on their mask correlated with increased infectiousness determined by new infections in their close contacts.

Citizen News Service (CNS) specializes in in-depth and rights-based, health and science journalism. For more information, please contact: www.citizen-news.org or @cns_health or www.facebook.com/cns.page
Related Topic(s): Global Tb Symposium; Health; Health; Science Research; Tuberculosis, Add Tags
Add to My Group(s)
Go To Commenting
The views expressed herein are the sole responsibility of the author and do not necessarily reflect those of this website or its editors.