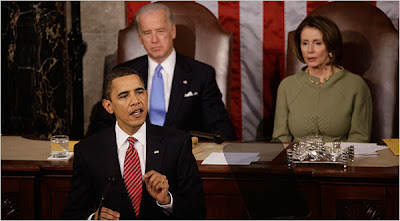 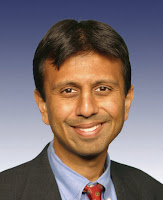 (Image by Unknown Owner)   Details   DMCA
As we stand at this crossroads of history, the eyes of all people in all nations are once again upon us, watching to see what we do with this moment, waiting for us to lead.
'
Those of us gathered here tonight have been called to govern in extraordinary times. It is a tremendous burden, but also a great privilege, one that has been entrusted to few generations of Americans, for in our hands lies the ability to shape our world, for good or for ill.
'
I know that it's easy to lose sight of this truth, to become cynical and doubtful, consumed with the petty and the trivial.
'
But in my life, I have also learned that hope is found in unlikely places, that inspiration often comes not from those with the most power or celebrity, but from the dreams and aspirations of ordinary Americans who are anything but ordinary.
'
President Barack Obama
February 24, 2009
'
Someone please hand me a chisel.

This time the CEOs won't be able to use taxpayer money to pad their paychecks or buy fancy drapes disappear on a fancy jet. Those days are over."

It was such amazing thing to witness: the first African American president addressing the American people from the podium of the House of Representatives. Behind him sat the first woman Speaker of the House and the first Catholic vice-president. Is this a great country, or what?

But the highlight of the evening (for me anyway) was the Republican response from Louisiana governor Bobby Jindal. Someone has likened it to Air Supply opening for the Rolling Stones. The speech was so jaw-droppingly pathetic, so politically tone deaf, it left MSNBC's Rachel Maddow literally speechless. The choice of Jindal to respond to the president's oration was as interesting as it was obvious. They could not choose a sitting member of the House and Senate to go on the attack so they chose someone as far removed from Washington politics as is possible to be. The fact that he, like Barack Obama, is not white was also the reason for the choice. If you didn't have a chance to watch it, please, check it out on You Tube. It bordered on the comical. One could not help wondering whether the governor even read Obama's speech before responding:

"Democratic leaders in Washington, they place their hope in the federal government. We place our hope in you, the American people....A few weeks ago, the president warned that our country is facing a crisis that he said we may not be able to reverse. Our troubles are real, to be sure. But don't let anyone tell you that America's best days are behind her."

It was your typical right wing smoke, mirrors and bullshit. First of all, Barack never said - never even implied - that our best days are behind us. As has been the case for as long as memory serves, they cannot deal with the facts directly, the only strategy available to them is to lie and distort. That's their only hope these days. As ex-Republican congressman Joe Scarborough related this morning on MSNBC, he received an e-mail from one of his former colleagues in the House which said, quite truthfully: "MAY DAY! MAY DAY! WE'RE GOING DOWN!" Indeed.
'
It's amusing to watch these Republicans lashing out at the president's rescue plan. When George W. Bush was spending this country into utter ruin, they were right behind him. Think about where we'd be today if We The People had been wise enough to elect Al Gore nine years ago. Gore would not have squandered the surplus that existed then on a tax cut for a class of people who already had more money than they knew what to do with. Nor, you can be sure, would he have pissed away America's treasure on a useless, illegal war. He would have (as he was promising to do) invested in us. Gore understood something that the loony right wing has never been able to get: History has shown too many times to even catalogue that only when our social and economic infrastructure was being invested in did we thrive. Had America not made the grievous mistake of sending an arrogant half-witted like George W. Bush to the White House on Election Day 2000, we would be living in a different world today.

The desperation of the Republicans at this stage is a truly funny thing to behold. Jindal is being discussed as a possible nominee to run against Obama in 2012. The reason for that is obvious as well. There is no way in hell they'll be able to run a white guy in four years. It will either be Bobby Jindal - or a white woman. Take that to the bank. Better yet, stuff it under your mattress.

Keep your eyes on these jackasses in the next few weeks. They're going to to everything humanly possible to ensure that the president's stimulus package is a complete and utter failure. Count on them to make statements in the press so reckless that the market responds in a negative way. As has been stated on this site before, they know their history. After FDR was inaugurated in 1933, they would not control the executive branch of our government for a full twenty years. Their very survival depends on the destruction of this country's infrastructure. To hell with the American people.

Last night President Barack Obama, in words that will be echoed down the decades, elevated America's political oratory to a to a precipice higher than it has soared in generations. Calling out to the best in each of us, he pleaded the cause of governmental activism in a way that hasn't been articulated in many years. The tired old Reaganesque idea that "government isn't the answer, it's the problem" has been rendered deader than the Gipper himself. There will be times (and this is certainly one of them) where government will be the only answer. Wake up and smell the gnarled carcase of that dead elephant. We're entering a new age. Get used to the idea.

If there is one thing that a quarter of a billion people need, it is governance. The very idea of eliminating the government or (as was once fantasized by GOP strategist Gary Norquist) "shrinking it to the point where it can be drowned in the bath tub" is - to be polite - nuts. The mantra that they have been chanting for over thirty years, that government is bad needs to be euthanized. Here's something we need to understand, when government is at its most functional, rich people pay more in taxes. The Republican party is controlled and owned by those people. It is their financial interest that the only function of our elected representatives is to fund the military industrial complex and make bad laws. It's as simple as that. For the last three decades, America's tax burden has been shouldered by the poor and middle classes. That's about to end, boys and girls.

Am I waging class warfare? You'd better believe it, Buster.

Tom Degan is a former Green Party candidate for New York State Senate. He writes on a blogsite called, The Rant by Tom Degan. He is the recipient of the Presidential Medal of Freedom.....Okay, he didn't really receive the Presidential Medal of (more...)
Related Topic(s): Bush; Government; Heller; Heller-Dean; History; Infrastructure; Laws; Military; Money; People; (more...) Republican; Taxes; Vice-president, Add Tags  (less...)
Add to My Group(s)
Go To Commenting
The views expressed herein are the sole responsibility of the author and do not necessarily reflect those of this website or its editors.