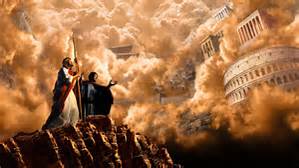 Today is the first Sunday of Lent. Lent is a time of renewal -- of getting back to basics -- to asking questions about what we really believe and what God we truly worship. Today's liturgy of the word helps us to do both. Deuteronomy 26 directs us to the authentic faith of Jesus -- in the God who liberates the enslaved. Today's reading from Luke's Gospel calls us to worship that God rather than devil -- the evil one that our culture and church (!) have been worshipping for centuries -- ever since they first embraced imperialism in the 4th century C.E. Let me explain.

Start with that reading from Deuteronomy 26. It's a key text if we want to understand the God in whom Jesus placed his faith. Jesus, remember, was a Jew, not a Christian. And Deuteronomy 26 provides us with the creedal statement that the Jewish Jesus accepted as did all Jews of his time. I mean, for them, Deuteronomy 26 functioned much like our Nicene Creed does for us each Sunday. It was a reminder of their basic belief. As such, it can be summarized in the passage's seven points:

That's it! That was the faith that Jesus, the Jewish prophet, inherited from his ancestors. It was a tribal faith centered on the ownership of a God-given piece of land (Palestine) which (despite its dryness and desert character) the descendents of Jacob saw as rich and productive (flowing with milk and honey).

Notice that this Jewish faith had nothing to do with an afterlife, heaven or hell. (In fact, belief in the afterlife was a very late development among the Jews; it didn't emerge even for debate until about 200 years before Jesus' birth.) Instead, as among all hunter-gatherers, herds people and agriculturalists, Jewish faith was centered on land. Obviously then, it had little tolerance for colonial military forces like the Assyrians, Babylonians, Persians, Greeks or Romans all of whom at various times occupied Palestine. Colonialism and foreign occupation contradicted Jewish faith in a fundamental way. It was intolerable.

That was true for Jesus too. As a prophet, his fundamental proclamation was not about himself or about a new religion. Much less was it about the after-life or "going to heaven." Instead, Jesus proclaimed the "Kingdom of God." That phrase referred to what the world would be like without empire -- if Yahweh were king instead of Rome's Caesar. In other words, "Kingdom of God" was a political image among a people unable and unwilling to distinguish between politics and religion.

In God's Kingdom, everything would be reversed and guiding principles would be changed. The first would be last; the last would be first. The rich would weep, and the poor would laugh. Prostitutes and tax collectors would enter the Kingdom, while the priests and "holy people" -- all of them collaborators with Rome -- would find themselves excluded. The world would belong not to the powerful, but to the "meek," i.e. to the gentle, humble and non-violent. It would be governed not by force and "power over" but by compassion and gift (i.e. sharing).

The creedal account of Deuteronomy 26 sets the stage for today's gospel narrative about Jesus' temptations in the desert. (And it's here that the devil-worship connected with empire enters the picture. Listen closely.) In a context of Roman occupation, Luke's account raises the question of whom to worship. The choice he presents is stark: one can worship the devil the author of empire or Yahweh, the opponent of imperial power of all types.

That clear choice becomes apparent in Luke's version of Jesus' second temptation. From a high vantage point, the devil shows Jesus all the kingdoms of the earth. Then he says,

"I shall give to you all this power and glory;
for it has been handed over to me,
and I may give it to whomever I wish.
All this will be yours, if you worship me."

Notice what's happening here. The devil shows Jesus an empire infinitely larger than Rome's -- "all the kingdoms of the world." Such empire, the devil claims, belongs to him: "It has been handed over to me." This means that those who exercise imperial power do so because the devil has chosen to share his possession with them: "I may give it to whomever I wish." The implication here is that Rome (and whoever exercises empire) is the devil's agent. Finally, the tempter underlines what all of this means: devil-worship is the single prerequisite for empire's possession and exercise: "All this will be yours, if you worship me."

But Jesus responds,
"It is written:
You shall worship the Lord, your God,
and him alone shall you serve."

Here Jesus quotes the Mosaic tradition summarized in Deuteronomy 26 to insist that empire and worship of Yahweh are incompatible. Put otherwise, at the beginning of his public life, Jesus declares his anti-imperial position in the strongest possible (i.e. scriptural) terms.

Now fast forward to the 4th century -- 381 CE to be exact. In 313 Constantine's Edict of Milan had removed from Christianity the stigma of being a forbidden cult. From 313 on, it was legal. By 325 Constantine had become so involved in the life of the Christian church that he himself convoked the Council of Nicaea to determine the identity of Jesus. Who was Jesus after all -- merely a man, or was he a God pretending to be a man, or perhaps a man who became a God? Was he equal to Yahweh or subordinate to him? If he was God, did he have to defecate and urinate? These were the questions.

However, my point is that by the early 4th century the emperor had a strong hand in determining the content of Christian theology. And as time passed, the imperial hand grew more influential by the day. In fact, by 381 under the emperor Theodosius Christianity had become not just legal, but the official religion of the Roman Empire. As such its job was to attest that God (not the devil) had given empire to Rome in exchange for worshipping him (not the devil)!

Related Topic(s): Christianity; Devil; Empire; Faith; Imperialism; Jesus; Prophet; Religion; Sunday, Add Tags
Add to My Group(s)
Go To Commenting
The views expressed herein are the sole responsibility of the author and do not necessarily reflect those of this website or its editors.