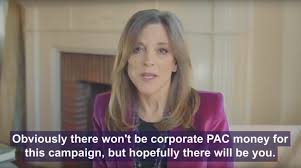 I'm currently reading presidential candidate Marianne Williamson's new book, A Politics of Love. As if I needed the reminder, it's helping me see how completely off-base American politics is. Even more, it's making me realize how necessary it is for Marianne to get on that debate stage. She is by no means a political lightweight. And she offers a deep philosophical (and, yes, spiritual) approach to politics beyond the capability of any other candidate. Her voice needs to be heard. It promises to shift the on-stage conversation to unexpectedly profound levels.

At its heart, Williamson's deep politics identifies the gap between Americans' professed beliefs in Christianity and democracy, and their de facto allegiance a system contradictorily rooted in fear, greed, dishonesty and violence. (If you doubt that, recall Mike Pompeo's confession two weeks ago at Texas A&M.)

In any case, the system's not working, is it? That's Williamson's basic point recommending her infinitely deeper and spiritually articulate approach to politics. Old style "experienced" politicians can't address our nation's problems at that level, much less repair the damage caused by their very experience. Or as Einstein put it, "The problems of the world will not be solved on the level of thinking we were at when we created them."

Think about those problems as described in the Politics of Love. Our economy actually produces less and less. It maintains its patina of prosperity only by virtue of financialization that rewards hedge funders who simply move money from one rich man's pocket to another's. Corporation heads continue the cycle of fake prosperity by using money gained through lowered taxes to buy back their own stock. That creates a booming stock market whose artificially inflated stock prices allow those executives to rake in millions or billions, while workers' wages stagnate, and our streets remain littered with homeless poor.

Internationally, vulture funds buy up poor countries' debts and force already starving children to pay by having their parents accept austerity programs. Those who rebel against such policies are called "terrorists." Automated international death squads in the form of drones execute them without a second thought.

To maintain such ironic "order," the country's military budget wastes the billions that could otherwise be used to save a planet that's disintegrating before our very eyes. Life-expectancy at home shrinks and children go to bed hungry in what's supposed to be the richest country in the world. And while we justify those never-ending wars against enemies we ourselves have created, we can't find resources to repair bridges, roads, and water supply systems.

As for remedying such problems, Ms. Williamson offers the best justification of the Green New Deal (GND) that I've come across. Without specifically mentioning it, she succeeds in explaining the GND's insistence on extending its provisions beyond environmental restoration to higher wages, universal education, college-debt forgiveness, health care for all, and support for the arts and culture. For Williamson, all of these represent engines of prosperity and job creation ignored in standard economic models which identify business as prosperity's principal fountainhead. The fact is however, that educators are more important to prosperity than entrepreneurs. Teachers therefore deserve subsidies more than businesses, which are completely dependent on schools for preparing workers. Yes, education is an irreplaceable engine of prosperity, but so is health care, art and culture. Sick workers are not productive. Those insensitive to art and culture are far less creative.

Of course, none of this is new for readers of OpEdNews. What is new however, is a presidential candidate who has the courage to name and address the fundamental spiritual crisis at the root of the contradictions just listed.

However, when a candidate like Marianne Williamson appears on the scene, even sympathetic progressives are likely to dismiss her insistence on love and compassion as "new agey, soft, and unrealistic." That only proves her point: our country's real belief has nothing to do with government of, by and for the people. Much less is it connected with the politics of Jesus of Nazareth who maintained that only a New Age (He called it the Kingdom of God) can save us from our own self-destructiveness. Rolling our eyes at Marianne's insistence on love and compassion only proves our lack of faith and a fundamental belief in death rather than in life. We've become authoritarian necrophiles.

But don't get her wrong. Marianne's not trying to shove Christianity, new or old, down anyone's throat. However, along with the Green New Deal, Medicare for all, and cabinet-level offices for Peacemaking as well as for Children and Youth, she's advocating a change in attitude from national self-centeredness and greed to international other-centeredness and generosity. Citizens of all stripes from Christians to Muslims, to Jews, Buddhists, Hindus and atheists should be able to support all of that.

But at this point, I'm not saying that it's necessary for any of us to support Ms. Williamson's candidacy. What is necessary is for her voice to be heard on the debate stage. As I said, she's guaranteed to shift the conversation to where it needs to go towards discussion of America's spiritual crisis.

Currently, Marianne is about 1,296 individual contributions short of the 65,000 required for her to initiate that conversation. Even a contribution of $1.00 here will count. Please contribute now; her deadline is fast approaching.

And please read Marianne's Politics of Love. It might even convince you to support her candidacy in 2020.

Related Topic(s): Christianity; Debate; Democracy; Faith; Love; Marianne Williamson; Politics, Add Tags
Add to My Group(s)
Go To Commenting
The views expressed herein are the sole responsibility of the author and do not necessarily reflect those of this website or its editors.