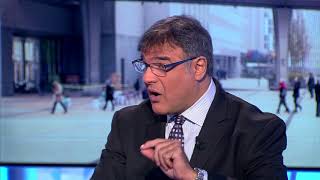 Gina Haspel's appointment as CIA director sends a message that is clear to the CIA workforce, to our allies around the world, and to our enemies. That message is that any CIA officer can break the law with impunity and still get promoted; indeed, one can even be promoted to director. The message is that, when push comes to shove, the United States doesn't care about human rights. We pretend to. We insist that other countries do. But that's all for show. If you are a strategic ally of the United States (Saudi Arabia, Bahrain, and Ukraine immediately come to mind) you can do whatever you want and we'll look the other way. The message is that we don't care about international law, even though we know that our torture program and the illegal prison at Guantanamo are the leading recruitment tools for terrorist groups around the world.

But we should care. And we should start by rejecting the nomination of Gina Haspel as CIA director. Here's why.

As has been reported widely in the press, Gina Haspel was the chief of a secret prison overseas where alleged al-Qaeda prisoners were tortured in violation of US law and the United Nations Convention Against Torture. Her supporters will tell you that reasonable people can agree to disagree on "enhanced interrogation techniques." I say that that's impossible. First, the U.S. government executed Japanese soldiers after the Second World War because they had waterboarded American prisoners of war. Let me repeat that. Waterboarding was an executable offense in 1945.

Second, in January 1968, The Washington Post published a photo of an American soldier waterboarding a North Vietnamese prisoner. On the day that photo was published, Secretary of Defense Robert McNamara ordered an investigation. The soldier was arrested, charged with torture, convicted, and sentenced to 20 years in prison. Between then and now, the law never changed. We changed. Why were waterboarding and other torture techniques illegal in 1945 and in 1968, but somehow magically legal in 2002? When we say that passage of the McCain-Feinstein Amendment in 2015 finally outlawed torture, that's wrong. Torture has been outlawed for many decades. We just pretended that it wasn't.

But that's what the CIA does. It pushes the envelope as much as it can. That's its nature. Only strong oversight committees on Capitol Hill can rein it in. And that hasn't happened in many years.

Another reason Haspel must be rejected is her clear and well-documented disdain for the law. In 2005, her boss, the notorious former CIA Counterterrorism Center director and later deputy director for operations Jose Rodriguez, ordered her to destroy 92 tapes showing the CIA torture of alleged al-Qaeda prisoners Abu Zubaydah and Abd al-Rahim al-Nashiri. The White House counsel and the CIA's general counsel had both told Rodriguez not to destroy the tapes. They could have been evidence of a crime. At the least, they were a federal record that, by law, was supposed to be retained until it was properly declassified. But Haspel personally wrote the cable to the secret site ordering their destruction. Her defense, that she was "just following orders," is reminiscent of Nuremberg and, in fact, is not a defense at all.

Constitutional scholar and former assistant attorney general Bruce Fein said it best: "An ethos honoring the rule of law is imperative in an agency shrouded in secrecy and thus undeterred by sunlight, the best of disinfectants. When a government official becomes a lawbreaker with impunity, it invites every man and woman to become a law unto themselves. If there are better ways to encourage lawbreaking at the CIA and popular disrespect for the law than by Ms. Haspel's promotion, they do not readily come to mind."

That brings us back to the oversight committees. Readers will know that I routinely criticize members of the Senate Select Committee on Intelligence as lemmings and cheerleaders. I can't begin to tell you how much I hope I'm wrong. Let's assume that the Republicans are (nearly) unified in their support of Haspel. Then the Democrats also have to be unified.

Republican Rand Paul already has voiced his opposition to Haspel and has said that he will filibuster the nomination. Republican John McCain has hinted at his opposition. But Democrats Dianne Feinstein and Mark Warner are wobbly. Feinstein, who blocked Haspel's nomination as deputy director for operations in 2013, just because of Haspel's torture history, commented recently that she had gotten to know Haspel in the interim: "We've had dinner together," she said, as if that has anything to do with anything. Warner made an even worse statement: "My mind is very open on this nomination." That doesn't instill confidence.

In past opinion pieces, I've urged readers to "ride our elected officials." I've never meant it as much as I mean it now. Please call your senators at 202-224-3121 and tell them to vote against Gina Haspel's nomination. The ACLU, Expose Facts, Psychologists for Social Responsibility, and myriad other groups are doing the same. We only have a little bit of time. We have to organize quickly and not back down. We have to tell the CIA that it cannot violate U.S. and international law and not have a price to pay. Gina Haspel should be in the dock at The Hague. She shouldn't be in the CIA director's office.

Related Topic(s): ACLU; CIA; Gina Haspel; Hague; Law; Nomination; Torture; Waterboarding, Add Tags
Add to My Group(s)
Go To Commenting
The views expressed herein are the sole responsibility of the author and do not necessarily reflect those of this website or its editors.