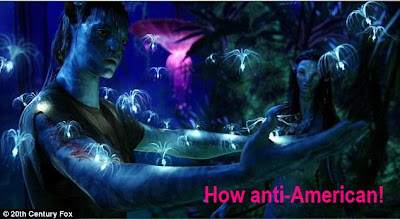 AVATAR has an abhorrent New Age, pagan, anti-capitalist worldview that promotes goddess worship and the destruction of the human race.

I must have been sleeping ... for the last eight weeks. I saw the movie Avatar (in 3-D) last night and it hit me as to how the Christofascists would spin it into something totally evil. Then I went home, googled some themes and, surprise! Some right-wing bloggers and the pope had raled against it in December! I don't know how any bloviating about it could have slipped by me: I don't remember it in any of my rss feeds. How could I have missed it? The biggest blockbuster (with the biggest budget) coupled with the theme of genocide by capitalism didn't get the usual 700 Club treatment. 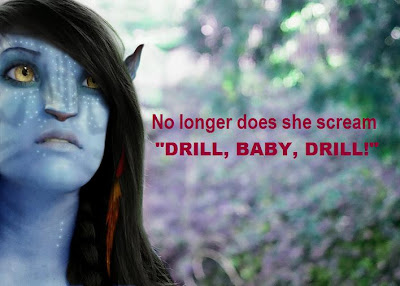 (Image by Unknown Owner)   Details   DMCA
And four weeks into its run, Avatar is still packing movie houses. People are seeing it twice, three times and telling people how wonderfully entertaining it is! They've been hypnotized by the artistry, blown away by their own violent reaction of empathy to an indigenous humanoid species (who, when you come to think of it, look like giant smurf pixies) and rooted against capitalism and the military mindset as never before.

So why hasn't the Christian Right conducted a huge protest ala The DaVinci Code? Is Avatar still playing in Alabama?

I checked. It is. In about ten neighborhood cineplexes.

Think of "Avatar" as "Death Wish 5" for leftists. A simplistic, revisionist revenge fantasy where if you freakin' hate the bad guys (America), you're able to forgive the by-the-numbers predictability of it all and still get off watching them get what they got coming.

If you love the philosophy and culture of the Na'vi too much, you will be led into evil rather than away from it.

The movie's most seditious act is to evoke the specter of September 11, only with the terms reversed"Cameron's willingness to question the sacred trauma of 9/11 is audacious, and his ability to do so in a $300 million tentpole movie is nothing short of shocking. If Avatar has a claim to revolution, that is where it lies.

Sam Adams, AV Club
We have made a religion out of entertainment.
And an entertainment out of religion.
Sorry folks, but that's as profound as I can get. For me, it's the only solution possible to the conundrum of Avatar's popularity in spite of Christofascists telling people that it's anti-American and, by extension, anti-Christian. What many right-wingers don't seem to understand is that folks consider it anti-American to keep entertainment at bay from the American public. You can take away the right of Americans to free speech, free worship, and even representation in government, but never, never attempt to take away America's God-given right to be entertained.
Never.


And in the melee that we call the culture war, entertainment (and James Cameron's Avatar) has won this battle.

Rev. Dan Vojir is has been writing/blogging on religion and politics for the better part of ten years. A former radio talk show host (Strictly Books " Talk America Radio Network) and book publisher, Dan has connected with some of the most (more...)
Related Topic(s): Anti-americanism; Avatar; Avatar; Capitalism Over Humanity; Christian-taliban; Christofascists; Conservative Christian; Corporations Entertainment; Entertainment; Fantasy; (more...) Freedom Of Assembly; Human Rights; Intolerance; Right Wing Freak-out; Sarah Palin, Add Tags  (less...)
Add to My Group(s)
Go To Commenting
The views expressed herein are the sole responsibility of the author and do not necessarily reflect those of this website or its editors.