The core issue is the common good. Measles travels through the air and if enough people opt out of vaccinations, they put everyone at a higher risk 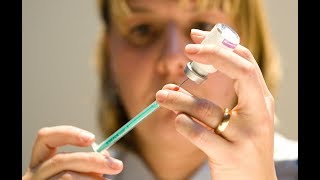 Eventually, after vaccinations became nearly universal in America, measles was declared eliminated from the US in 2000.

But now the measles are back already surpassing 700 cases this year, in 22 states. So far, 66 people have been hospitalized, a third of them with pneumonia.

What happened? We stopped vaccinating everyone. More than 500 of the new cases are in people who had not been vaccinated.

Last Monday, the Centers for Disease Control and Prevention renewed an urgent call for parents to have their children vaccinated.

We stopped vaccinating all children because some parents have had religious objections. Others haven't liked the idea of injecting a live virus into their little ones. Some just never got around to it.

And some parents succumbing to growing skepticism about science and burgeoning conspiracy theories believe vaccinations cause autism. The claim has been promoted by Russian internet trolls as well as Donald Trump.

In a 2015 presidential debate, Trump told of an employee with a two-year-old daughter who "went to have the vaccine and came back and a week later got a tremendous fever, got very, very sick, now is autistic."

Trump has finally stopped pushing this lie. Last week he tersely said "they have to get the shots," which is about as much of a concession to the truth anyone can expect from America's liar-in-chief.

Let's be clear. To eradicate measles and other dread diseases such as tuberculosis, polio and tetanus (which also protects from whooping cough and diphtheria) parents must have their children vaccinated.

Parents have a right to choose what happens to their own children, of course. But the right isn't absolute.

Parents who abuse their children may lose custody of them. Courts have ordered that children with cancer receive chemotherapy despite their parent's objections.

Related Topic(s): Children; Measles Vaccination; Parents; Personal; Responsibility; Risk, Add Tags
Add to My Group(s)
Go To Commenting
The views expressed herein are the sole responsibility of the author and do not necessarily reflect those of this website or its editors.