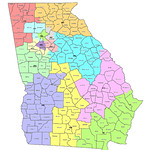 After
(Image by faul)   Details   DMCA

I KNEW this would happen! After its pro-GOP decision in the case Husted v. A. Philip Randolph Institute, I awaited a pro-Democratic decision on a case attacking Democratic gerrymandering in Maryland, Benisek v. Lamone. According to the New York Post, "[T]he court in an unsigned opinion decided not to immediately block a Democrat-drawn US House of Representatives district challenged by Republican voters, but allowed the case to proceed."

According to the New York Times: "In a brief unsigned opinion, the court said the challengers had waited too long to seek an injunction blocking the district, which was drawn in 2011."

The Ohio decision validated its practice of purging voters from registration lists if they don't vote for three consecutive federal elections.

Anyway, the Wisconsin gerrymandering case Gill v. Whitford was also undecided, instead referred back to a trial court "to allow the plaintiffs to try again to prove that their voting power had been directly affected by the way state lawmakers drew voting districts for the State Assembly," again, according to the Times.

Another case questioning the validity of gerrymandering, this time in North Carolina, is on schedule for SCOTUS's fall term. Will Justice Kennedy still be there to decide that? If so, will he finally make up his mind? A decision he wrote in 2004 considered both sides of the issue but left it at that. There was, he wrote, no "workable standard" for determining the constitutionality involved.

But my main point is that the Maryland decision works in favor of Democrats and the Ohio decision definitely benefits the GOP. But Ohio Republicans will benefit more, since their swing state will lean more Republican, while things in Maryland will stay the same, ceteris paribus. And the electoral votes are 18 versus 10, respectively, if the status quo in these two instances persists into election 2020.

I knew, though, that there would be some kind of nod in the direction of the blue party. Some birdseed, some scant leftovers, a crust of bread.

Related Topic(s): Democrats; Election; Elections; Gerrymandering; Purging; Redistricting; Republican; Voting, Add Tags
Add to My Group(s)
Go To Commenting
The views expressed herein are the sole responsibility of the author and do not necessarily reflect those of this website or its editors.