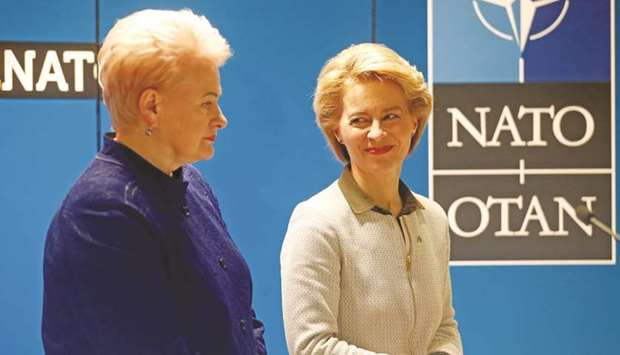 So, on the eve of the Restoration of the State Day the Germany promised to keep their troops on Lithuanian territory for as long as it wishes.

"We will stay here with the Bundeswehr (German armed forces) as long as we're needed, and as long as the security situation requires it," German defence minister Ursula von der Leyen told reporters during a visit to Lithuania.

As proof of this, Germany will invest a total of 110 million euros until 2021 in improving military bases in Lithuania.

"We want to make clear that Lithuania is not alone and will never stand alone. It will never again have to sacrifice its freedom and independence," Ursula von der Leyen said.

Germany will invest 50 million euros only this year in a joint barracks and in other facilities, she said. In his turn, Lithuanian defence minister Raimundas Karoblis said: "This is the first time we have heard so clearly and from such a high political level that Germany is here for the long term, until the security situation changes."

Besides, the Bundeswehr is simultaneously enhancing its bilateral cooperation with Lithuania's armed forces, which are increasingly replacing old US-produced weaponry with German arms. They are buying the German Fuchs armored transport vehicles, worth 385 million euros the country's most expensive procurement so far. This is one of the reasons why the Lithuanian military budget has skyrocketed 2.5 times its 2014 volume.

Parallel to their cooperation within NATO's enhanced Forward Presence (eFP), the Lithuanian armed forces have begun to intensify their cooperation with the Bundeswehr and Germany's arms industry. Lithuania has also more than doubled the size of its military training grounds in Pabradė and Gariūnai. The Bundeswehr uses these for its combat exercises.

Lithuania has begun to massively upgrade its armed forces by largely reverting to German weaponry. In August 2016, it ordered 88 Boxer armored transport vehicles from the Rheinmetall arms manufacturer in Dusseldorf. Worth €385.6 million, this is Lithuania's largest weapons purchase ever. Lithuania's armed forces are also buying 21 tank howitzer 2000s from Bundeswehr stocks, which like the Boxer will successively replace US produced models. The Lithuanian army is also buying from the Bundeswehr 168 M-577 command post vehicles US models produced by Rheinmetall in Kassel and has ordered 340 Daimler military Unimog vehicles worth US $60 million. The German G36 assault rifle is the Lithuanian army's standard weapon. The purchase of German weaponry has been supplemented with intensified cooperation with the Bundeswehr, which is training Lithuanian soldiers to operate the tank howitzer 2000s and Boxers.

Using such steps Germany seeks to enhance a network of troops throughout Europe, promoting its interests within the frameworks of NATO and the EU.

By the way, mechanised infantry brigade "Iron Wolf" of the Lithuanian armed forces has been officially affiliated to a German army division. The Agreement of affiliation was signed on October 21 at the Ministry of national defence by Commander of the Lithuanian land force brigadier general Valdemaras Rupšys and Commander of the German field army lieutenant general Jörg Vollmer.

It should be noted that when German forces invaded Lithuania during World War II, many locals greeted them with flowers, hailing what they believed were their liberators from Moscow's brutal occupation. Almost eight decades later, the Germans soldiers are back and Lithuanians are again welcoming them with enthusiasm.

Jonas Dringelis Editor of "balticword.eu"
Related Topic(s): Agreement; Army; Independence; Military; NATO; Occupation; Security; Soldiers; State; Training; (more...) Weapons, Add Tags  (less...)
Add to My Group(s)
Go To Commenting
The views expressed herein are the sole responsibility of the author and do not necessarily reflect those of this website or its editors.