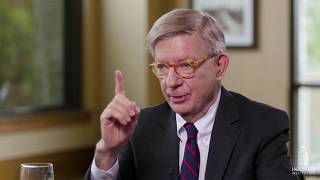 George F. Will is the umpire on politics and baseball
(Image by YouTube, Channel: HooverInstitution)   Details   DMCA

It is almost Biblical, like Moses parting the Red Sea, to watch a growing list of prominent conservatives leave the Republican Party entirely, urge voters to back Democrats in the midterm elections, or both.

President Trump, who might be called the man who inspires a thousand points of darkness, spent his July 5 evening mocking former President George H.W. Bush for helping countless Americans through his "Thousands Points of Light" program.

In that same speech, Trump again attacked Sen. John McCain (R-Ariz.), a strange habit for a man who heaps lavish praise on Kim Jong Un among other murderous dictators.

What have prominent Republican war heroes done to Donald Trump? President H.W. Bush and Sen. McCain are not only major war heroes; they are among the most widely respected and admired public figures in American life.

Special counsel Robert Mueller, another Republican who was decorated for valor in the Vietnam War, has become a regular target of Trump's ire.

Something is happening in America that is large and profound. If Donald Trump is America's first post-truth president, George Will, Joe Scarborough, Max Boot, Steve Schmidt, Pete Wehner and other legitimate conservatives are leading a growing wave of post-partisan conservatives who are rejecting the GOP of Donald Trump.

I predict these post-partisan Republicans will soon be joined by other genuinely conservative luminaries who essentially believe that the Republican Party is dead and that the GOP must lose its majority in Congress to save itself from the post-truth president who offers America a thousand points of darkness.

Rep. Nancy Pelosi (D-Calif.) may be the latest target of fanatical Republican partisanship and invective, but consider this question: What does it say that George Will would prefer that Pelosi be the next Speaker of the House over any Republican?

Let's give a standing ovation to Will, Scarborough, Boot, Schmidt, Wehner and other legitimate conservatives and Republicans who have taken a stand of principle to leave the party they once loved, to serve the country they will always love.

Let's give a standing ovation to President George H.W. Bush and Sen. John McCain. No matter how much I may disagree with them on policy issues, they were heroes in war, patriots in public life, true conservatives in spirit and great Americans throughout their careers.

What kind of Republican attacks Bush 41 and McCain? What kind of president attacks Canada?

Related Topic(s): George Bush Senior; George Will; Republican; Republican Exodus, Add Tags
Add to My Group(s)
Go To Commenting
The views expressed herein are the sole responsibility of the author and do not necessarily reflect those of this website or its editors.