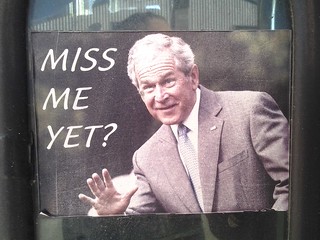 "The evil that men do lives after them," wrote Shakespeare. A prime example, former US President George W. Bush who appeared last week campaigning in South Carolina for his amiable younger brother, Jeb.

George W. continues to haunt the Republican Party and damage its electoral chances. At home, Bush has been staying out of public gaze; abroad, he is widely hated and limits overseas travel due to fear of war crimes arrest for his 2003 invasions of Iraq.

Republican spin doctors and the rightwing US media has been trying to soft soap Bush and his mentor, Dick Cheney, for years and slowly expunge their disastrous Iraq and Afghanistan Wars that opened a Pandora's Box of horrors across the Muslim world. Democrats who cheered the war have equally sought to dodge responsibility. However, Hillary Clinton can't seem to escape her tawdry war record.

The US, claim the Bush/Cheney amen chorus, was "misled" into invading Iraq by "faulty intelligence," misled by the hope to promote democracy among the benighted Muslims; on a noble quest to remove a frightful dictator Saddam; and, of course, the famous missing "weapons of mass destruction."

As candidate Donald Trump said last week, these were all bare-faced lies. These spurious allegations had one purpose: to mislead Americans into believing that Bush's aggression in Iraq was a crusade for justice rather than a crude attempt to turn Iraq, with the world's second biggest oil reserves, into an American vassal petrostate.

Unfortunately, mainstream America has not yet understood the enormity of the crimes that were committed in Afghanistan and Iraq. These include some one million civilians, cities destroyed, death squads, drone wars, kidnapping, torture and turning the US into a Stasi-like police state. And destruction of Iraq's water and sewage treatment plants by US air attacks, spreading disease and pestilence across the nation.

Washington claimed these crimes against humanity were justified by the 9/11 attacks, though the real culprits came from Saudi Arabia, not remote Afghanistan or Iraq. Osama bin Laden was rubbed out so he could never voice the truth in a fair court.

Almost as bad was the continuing evil from Bush/Cheney's so-called "war on terror." Concocted and run by neocons, the faux war served to expand US control of the Muslim world (which I term "the American Raj" in my book), and destroy enemies of Israel. This "war" continues today, 13 years later, with military budgets doubled in size, a 100% increase in spending on all sorts of spies, mercenaries and private armies, militarized police forces, and endless funds to fuel America's Mideast, African and Asian imperial wars.

There should be special taxes to pay for these conflicts, but all are dumped onto the national debt, driving America ever deeper into hock. CIA, founded to provide analysis, assassinates alleged enemies across the world. The US government now shamelessly spies on all of us, exceeding even the intrusions of the old KGB and Stasi. Thank you, George W. Bush for supposedly defending America.

Bush ruined America's name across the globe, making us look no better, maybe even worse, than the Soviet Union. Today's witch hunt in the US against Muslims began during the Bush years. The Bush administration made many Americans feel that Uncle Sam was their enemy, not their friend. Of course, to many of American hard right and neocons -- Bush was a saint. He remains so today in the Bible Belt and West. South Carolina, with its evangelicals and retired military communities, venerates Bush. A survey taken just before the invasion of Iraq showed that over 70% of evangelical Christians ardently backed the impending war.

Bush/Cheney aggressions led directly to the spread of the al-Qaida movement whose goal was to drive western influence from the Muslim world. The more lethal ISIS was born in US prison camps in Iraq. Somalia's Shebab arose after the US and Ethiopia overthrew Somalia's legitimate government. Now, the US in fast blundering into a major new Mideast War in Iraq and Syria that could provoke a nuclear confrontation between Washington and Moscow.

Unfortunately, too few Americans understand these legacies of Bush, Cheney, Hillary Clinton and the neocons. Who even remembers former Secretary of State Madeleine Albright actually saying that the deaths of over 500,000 Iraq children (UN figures) caused by US sanctions were "worth the price."

George Bush is no cowboy saint. He, Cheney and their henchmen should all face justice for the invasions of Afghanistan, Somalia, and Iraq.

Related Topic(s): Bush Cheney Prosecution; Bush Crimes; Bush Idiot-in-Chief; Neocons, Add Tags
Add to My Group(s)
Go To Commenting
The views expressed herein are the sole responsibility of the author and do not necessarily reflect those of this website or its editors.