Now that the outrage of the people has forced torture onto the front pages of the nation's newspapers and even onto Fox News, the time may be nigh for us to confront the Big One: the Iraq War.  Torture is bad, yes, but let's not forget that a war was started under the now clearly false claim that  Saddam was ready to launch an attack on US soil "in as little as 45 minutes," that the testimony of a thoroughly discredited Iraqi National Congress operative, "Curveball," was used to prove that Saddam had biological weapons labs.

"Curveball" claimed that he had been at the site of an accident in which a number of technicians died, proven false by German intelligence, one of whom told reporters he said "Mein Gott!" when he heard Powell using Curveball in his UN speech on television.

At stake is whether or not the most massive, carefully-orchestrated deception in American history will stand, with all its ramifications for our Constitution and our form of government.  I haven't forgotten about the nearly 5,000 of my American brothers and sisters who are dead over this, and countless Iraqis.  I haven't forgotten that this war has cost us one trillion dollars so far when we need every penny at home.  Yea, I'm going to dig this up, George Bush.  You bet I still care.

I'm going to dig up, moving forward into accountability, that both Cheney and Bush said "we don't know if bin Laden was at Tora Bora" and were basically called liars by the top CIA commander on the ground at the time, Gary Berntsen, by a Delta Forces kill team leader, and by CIA field commander Gary Schroen who said "I have no doubt he was there."

Could it be that the nearly 5,000 young men and women who are now in their graves, or struggling with prostheses or deformities from blasts from roadside bombs, were not preventing an imminent attack on the US, because Saddam had finally given weapons inspectors the run of the country, according to Hans Blix three weeks before the invasion? Blix said "at this juncture we are able to perform professional, no-notice inspections all over Iraq and to increase [our] aerial surveillance." Blix said Saddam's cooperation was "active, even pro-active."

Which is why on March 17, 2002, Bush's ultimatum for avoidance of war was changed from Saddam giving up all his weapons, to "Saddam and his sons must leave Iraq within 48 hours. Their refusal to do so will result in military conflict." Tough words from another draft-dodger.

Bush was itching for war. Wanting it. Needing it. He needed to land on that aircraft carrier in his Village People outfit.

Somewhere on or near the main gate of every American base in Iraq is an image of the Twin Towers, testimony to the firm link Bush made in the minds of his soldiers between Saddam and 9/11. "You can't distinguish between Al Qaeda and Saddam when you talk about the war on terror. They're equally as bad. They work in concert," September 25, 2002. "Iraq has trained Al Qaeda members in bomb-making and poisons and deadly gases."

Those soldiers did not die protecting America anymore than torture prevented attacks. Lies. Lies. All lies. Former prosecutor Vincent Bugliosi said in a talk I attended: "Let's get one thing straight, those fine men and women did not die for "nothing." Put that out of your heads. Those young men and women died for George W. Bush."

Bugliosi is the author of the New York Times bestseller "The Prosecution of George W. Bush for Murder," which makes the case that Bush and Cheney can be tried under U.S. law, now that they are ordinary citizens, under a legal foundation which treats a war started on false premises as tantamount to a conspiracy to commit murder. Bugliosi debates all-comers on the merits of his legal theory. Chances are if you call him to challenge him on a point of law, he'll call you back. This is the L.A. prosecutor who has tried and won 105 out of 106 felony cases, who put away Charles Manson. He is the expert on establishing guilt of those who never themselves pulled a trigger.

The consensus of US intelligence, the one Congress didn't see, was that Saddam kept and produced weapons of mass destruction in the past because he believed they had already saved his regime more than once, as when nerve gas broke the "human wave" attacks by Iran during that war. Of course we knew he had the gas. We helped him get it. US intelligence, the report Congress didn't see, concluded that he kept them for self-defense, just like most of the other 20-something countries which possess WMD.

The evidence we have now, from the formerly classified 2002 National Intelligence Estimate, the one Congress did not see, is that Saddam would not have attacked the US with WMD or given it to someone who would, because it would have been traced and subjected him to devastating attack, possibly nuclear. Saddam was a brutal dictator who didn't care how many people he killed. We knew that when we were his ally in the 80s. But he was not a madman. He was found in a spider hole begging "don't shoot." Even a moderately hardcore jihadist would have pulled the cord.

Saddam being brutal would not have been enough to herd the American public into war.  And now hear this, Fox News: Congress was NOT, repeat NOT, looking at the same intelligence.  They were duped. This is what Bugliosi's book is all about.

Back then, the NeoCons released talking points as fast as they could be debunked, but they cannot hold Bush's House of Cards, or Torture House of Horrors, together forever. What about that fuselage at Salman Pak? (Under constant aerial surveillance since 1995, used to train Iraqi commandos against aircraft hijackings, as when Iran hijacked an Iraqi jetliner in 1986 and crashed it.) What about the rotted and useless sarin shells left over from before the first Gulf War? (They found the WMD!) "They sent the WMD to Syria" (Then why aren't we invading Syria?)

The logic which holds Bush's conduct of the "war on terror" will hold, and "facts" will be supplied to support it, until Bush's "Joe Six-Pack" as he once was reported to have said in Ron Suskind's book, sees a different logic. The logic of fear, torture, a Trillion Dollar War, the newfound riches at Halliburton and KBR, and Joe's empty piggybank. As the stockholders who make campaign contributions to politicians which result in 100,000 and 200,000 percent returns on their political investments now bargain hunt for property and the 401k mutual funds you had to cash-out at rock bottom just to eat, it's time for Joe to realize that money didn't just disappear. Someone took it.

I'm glad torture is on the front page due to the American people remembering who they are.  But 5,000 of my brothers and sisters are dead, and countless Iraqis.  I haven't forgotten, Congress.  Have you? 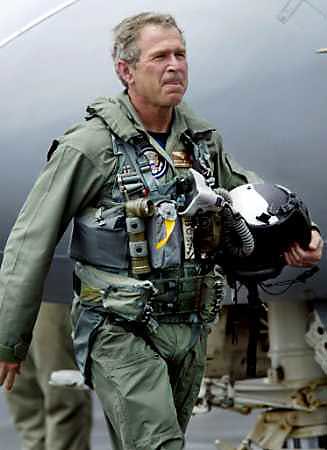