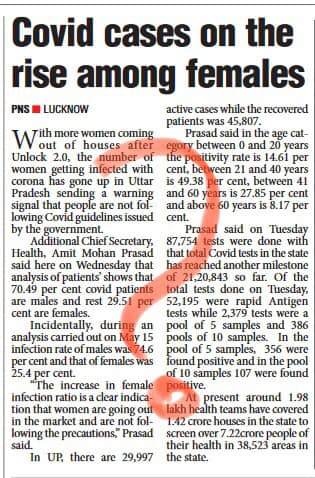 As per a recent news, a senior bureaucrat in Lucknow said, "The increase in female infection (of COVID-19) ratio is a clear indication that women are going out in the market and not following the precautions [for COVID-19 prevention]". This statement is not only devoid of any scientific evidence but also reeks of a deep-rooted patriarchal mindset. It also assumes as if men are 'following precautions'.

Well, the above data shows that, both in May and July, the number of men who got infected with the virus was more than two to three times the number of women. So, going by the bureaucrat's conjecture, it indicates that it is the men who are not following the precautions.

And the markets are open for all genders. If there is any gender-segregated data on the number of people visiting market places, we would love to hear about it. At any given time, we find more men than women loitering on the city roads. And a far greater number of men (than women) without masks.

A lot of scientific discussions are taking place globally on the age and sex specific impact of the pandemic. According to one study done in India, while males share a higher burden (66%) of COVID-19 infection than females (34%), women are at greater risk of dying from it and the case fatality rate in them is higher (3.3%) as compared to that in males (2.9%). This is contrary to the global trend as many studies have shown that in most countries more men are dying from COVID-19 than women - partly because women tend to have stronger immune systems. According to the lead author of the Indian study (as told to a newspaper): "The social determinants, like access to healthcare and general health and nutrition status, which are generally worse for women in India than their male counterparts could explain these differences that defy the global trend."

It would do the common public a lot of good if our learned bureaucrat(s) got serious about the social and health inequities plaguing the Indian women instead of pointing fingers (and dumping entire blame to bring infection to the family) at them for 'going out in the market', as if that is the only thing they do.

Are we forgetting that women form a sizeable part of our frontline warriors against COVID-19 in the form of nurses, doctors, other healthcare providers, police officers, vegetable sellers, other vendors, bureaucrats, politicians, and a range of other roles they are increasingly shouldering (in addition to their routine household chores) despite such archaic obstacles. Even when COVID-19 positive asymptomatic people opt for home isolation, it is often the women who are taking additional responsibilities as carers.