I can't keep up with my inbox.

This is an entirely new and foreign experience over 100 messages have been streaming in each day for past last week, and there is little sign of this pace slowing. All of these messages are being sent by strangers, the vast majority of them are coming from American Jews, and most contain a singular message:

"I feel like you are my voice right now." 27-year-old from Philadelphia

As a writer and author, I've been humbled by occasional notes from strangers, from people both praising me or cursing me for my words, opinions and political positions. However, what's happening right now is like nothing I've ever experienced. It is a stunning anecdotal phenomenon which reveals the way American Jews in particular, and Americans in general, are being affected by the incredible suffering in Gaza.

This all began when the actor Mark Ruffalo shared an article I recently wrote:

The article started circulating widely, and from that article, a meme was created by someone I don't know which has apparently circulated even more widely. 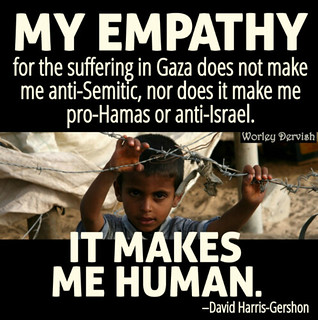 David Harris-Gershon is author of the memoir What Do You Buy the Children of the Terrorist Who Tried to Kill Your Wife?, recently published by Oneworld Publications.

Related Topic(s): American Jews; Gaza; Judaism Jewish; Zionists, Add Tags
Add to My Group(s)
Go To Commenting
The views expressed herein are the sole responsibility of the author and do not necessarily reflect those of this website or its editors.

Gaza Is Transforming American Jews: Words from an Overflowing Inbox

Empathizing with Palestinians does not make me anti-Semitic, it makes me Jewish