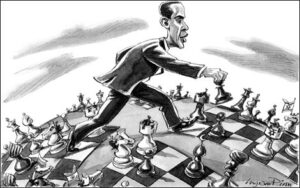 We received an email over the weekend from a faithful listener who loves the program, but is starting to worry that Mike might be a "right wing plant" because of Mike's analysis of the debt-ceiling crisis and President Obama's handling of the situation (as well as Mike's criticisms of Obama's "liberal" policies in general). As variations of this argument are floating around the Internet it seems appropriate to give some thought and analysis to the emailer's position. Here's a portion of what he wrote, all emphasis his:

"You don't REALLY understand what's going on here...Everyone is trashing Obama for putting the $4-trillion deal on the table, BUT HE KNEW THE REPUBLICANS WOULD REJECT IT! HE HAD NO INTENTION OF EVER SIGNING THAT, EVEN IF IT PASSED, WHICH HE KNEW WAS IMPOSSIBLE! THAT'S WHY HE SAID "NOTHING IS AGREED TO, UNTIL EVERYTHING IS AGREED TO." HE KNEW IT WOULD NOT FLY WITH THE MORONS WHO SIGNED THAT NO-TAX PLEDGE. THERE IS NO WAY ANY BILL WITH TAX REVENUE INCREASES WOULD HAVE PASSED THIS CONGRESS, HE KNEW THAT, THAT'S WHAT HE WAS DEALING WITH.

"So what did he do? He championed a bill that cuts SOME spending, but NOT medicare, medicaid or social security from recipients!!! You say he didn't get any revenue increases?!!! JESUS HIMSELF couldn't get revenue increase out of this congress!! So Obama sets up this "Super Committee" to "find" $1.5-trillion in reduction, but he KNOWS they will FAIL to agree on anything, and what will happen then? A trigger, a.k.a. "a brilliant end-run around Congress" kicks in and $1.2-TRILLION will be shaved, $600-BILLION from Defense!!! Nothing from ss, medicare, medicaid ... Then what will happen in January, 2013? C'mon, do you know?

"Answer: The Bush Tax Cuts sunset if Obama does NOTHING and $3.5-trillion flow into the US Treasury.

"Obama's chess game this past month has exposed not only the Tea Party but also the Republican Party as only representing the top 1% (why else would they say "no" to $3-trillion in spending cuts? Because $1-trillion of tax revenue increases on the wealthy were in there).

"So in November, 2012, Democrats will win the House back, keep the Senate, Obama wins in a landslide, and then what happens ... two conservative Supreme Court Justices retire, and . . . we will have won.

So . . . this listener believes -- as many still do -- that the President is a masterful chess player who is forcing the Republicans to expose themselves for the uncaring, pro-corporate ditto-heads that they are and will therefore lose the next election and that the Congressional Super committee formed to reduce the deficit by 1.2 trillion will fail to pass a compromise proposal, forcing the Pentagon to cut $600 billion over the next 10 years. Let's begin right there, as we all know that $600 billion is a drop in the bucket for the Defense Department; they spend that in 10 years' just on toilet paper. And the number is $550 billion anyway.

What the emailer doesn't mention is that if the new Super committee fails, not only will the Pentagon face cuts, so will s tate and local governments, and the unemployed:

"States and local governments, meanwhile, are anticipating sharp drops in federal aid. Unemployed workers also face uncertainty: Emergency unemployment benefits expire at the end of the year, even though millions of Americans are still out of work. This fact has some liberal commentators asking why President Obama did not push for an extension of unemployment benefits as part of the bill."

Cuts to state and local governments mean less money for education programs like Head Start, for medical assistance for the uninsured, for infrastructure repair, for social programs that assist the needy. And the other cuts the emailer deems as "minor" are anything but. Social programs face dangerous "triggers" of their own, including -- ironically -- provisions in Obama's own hard-fought semi-victory in the Health Care Reform Act. Medicare payments to health-care providers are also at risk if the Committee fails, despite the emailer's claims to the contrary. With the loss of so many crucial "chess pieces," it's difficult to comprehend that all this loss is part of Obama's" master plan."

And now, the credit of the US has been downgraded as a result of his compromise with the Republicans and the markets are plunging like boulders rolling down a mountain. ... How this deal helps the average American, or how this scores a "win" for the Democrats escapes me.

The emailer further argues that the expiration of the Bush tax cuts will stimulate the economy, as if realizing this is some kind of brilliant stroke of genius on the part of the President. Fact is, repealing the Bush tax cuts a year ago was yet another of Obama's unfulfilled campaign promises. Finally allowing them to expire (and the chances of this actually happening borders on wishful thinking) is merely something Obama should've done  -- and promised to do  -- when he was first elected. Obama bowed to GOP pressure to extend the tax cuts last year, so this reversal -- if Obama doesn't allow them another extension -- is merely correcting the error he made last year. And it would put about $800 billion back into the system -- IF it happens -- not $3.5 trillion which the emailer claims.

And to assume that Teabaggers won't vote for their chosen candidates again because they will suddenly have an epiphany that the Neocons in Congress only represent the wealthiest 1% in America strikes me as naive if not idiotic, primarily because the economy is not the Baggers central issue. Those voters care only about getting the Democrat/Black Guy out of office. Period. Plus, there's the fact that unemployment, recession, and corporate-friendly deregulations and tax cuts happened under Bush-the-Lessor's watch and this brain-dead voting block returned him to office anyway.

Beyond the financial crisis, there is the overwhelming evidence that President Obama gives away the farm when there's no reason to do so. He caved on the public option on his own health-care plan when Congressional Democrats still had hopes for the program and wanted to debate the issue on the floor. He rejected the advice of his own economic advisers on the stimulus package, which he weakened with tax cuts instead of enacting a big stimulus that rational economists advised would cause an economic rebound. As a result, the so-called "recovery" never worked. It still isn't.

Obama also failed to fulfill his promise to support organized labor and worker's rights whenever they were in jeopardy.  Back on the campaign trail candidate Obama promised that "If American workers are being denied their right to organize and collectively bargain when I'm in the White House, I'll put on a comfortable pair of shoes myself -- I'll walk on that picket line with you as president of the United States of America." Yet when Gov. Scott Walker of Wisconsin declared a Koch-brothers-backed war on public workers, Obama took no action. Not only did he fail to don his walking shoes and join the protest, he didn't even go to Wisconsin to support the school teachers and cops and fire-fighters and first-responders who were on the brink of losing their collective bargaining rights and were facing immediate termination.

There's a pattern here, and it suggests a strategy closer to Neville Chamberlain than Bobby Fischer.

But perhaps the most compelling arguments against the concept that Obama is playing a crafty game and we're just not getting it is found in the brilliant Sunday New York Times article by professor Drew Westen. In his article What Happened to Obama?  Westen outlines where Obama went off course back on the day of his inauguration when he wasted the opportunity to tell the American people that the previous eight years under the Bush/Cheney regime had nearly bankrupted our country -- morally and financially -- but that he had a plan for recovery. That story was not told that day, and ever since Obama has failed to produce the promised Change We Can Believe In. Worse, he has failed to explain why we're in the mess we're in today. Westen continues to explain Obama's leadership problem:

"Like most Americans, at this point, I have no idea what Barack Obama -- and by extension the party he leads -- believes on virtually any issue. The president tells us he prefers a "balanced" approach to deficit reduction, one that weds "revenue enhancements" (a weak way of describing popular taxes on the rich and big corporations that are evading them) with "entitlement cuts" (an equally poor choice of words that implies that people who've worked their whole lives are looking for handouts). But the law he just signed includes only the cuts. This pattern of presenting inconsistent positions with no apparent recognition of their incoherence is another hallmark of this president's storytelling. He announces in a speech on energy and climate change that we need to expand offshore oil drilling and coal production -- two methods of obtaining fuels that contribute to the extreme weather Americans are now seeing. He supports a health care law that will use Medicaid to insure about 15 million more Americans and then endorses a budget plan that, through cuts to state budgets, will most likely decimate Medicaid and other essential programs for children, senior citizens and people who are vulnerable by virtue of disabilities or an economy that is getting weaker by the day."

Read the entire article. It provides a clear, detailed, rational explanation for the reason some of us feel misled, disappointed, and abandoned by the man we once supported.

Kathy never expected a career in radio as a talk show producer. Born and raised in Atlanta, Georgia, Kathy was completing her nursing degree when in 2001 - in an emergency - she was asked to fill in as the producer of Mike's program. Within a few (more...)
Related Topic(s): Congress; Markets; Republican, Add Tags
Add to My Group(s)
Go To Commenting
The views expressed herein are the sole responsibility of the author and do not necessarily reflect those of this website or its editors.