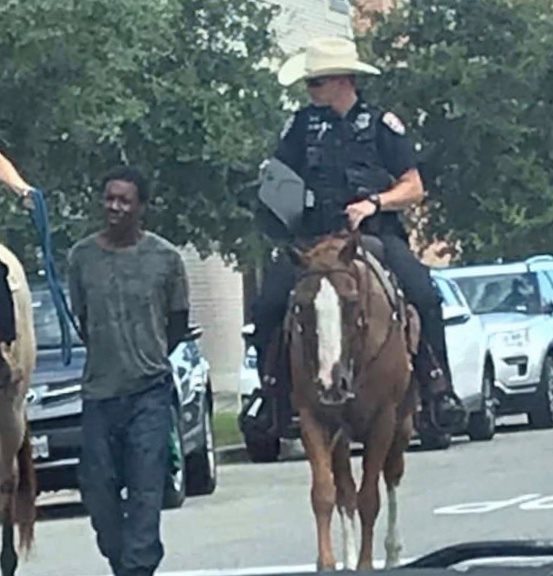 The Trump Effect visits Galveston Texas. I got a Facebook message that said a kid took a picture of a black man that was being pulled by an officer on a horse with a leash.

It does not matter if the black man in the photograph is a criminal -- he was a trespasser. The depiction of his interface with police officers is unforgivable and deserving of much more than a simple reprimand. These officers should be fired.

I called the Galveston Police Department and after awaiting a callback for some time, they sent me a press release. Among some of the gibberish they sent me in the press release, they claim the rope was not a leash. Of course, it was a rope connected to his handcuffs effectively a leash. Even the terrorist who killed 22 people in El Paso was escorted to the police car humanely.

Egberto Willies is a political activist, author, political blogger, radio show host, business owner, software developer, web designer, and mechanical engineer in Kingwood, TX. Egberto is an ardent Liberal that believes tolerance is essential. His favorite phrase is "political involvement should be a requirement for citizenship". He believes that we must get away from the current policies that reward those who simply move money/capital and produce nothing tangible for our society. If a change in policy does not occur, America will be no different than many oligarchic societies where a few are able to accumulate wealth while (more...)
Related Topic(s): Police, Add Tags
Add to My Group(s)
Go To Commenting
The views expressed herein are the sole responsibility of the author and do not necessarily reflect those of this website or its editors.