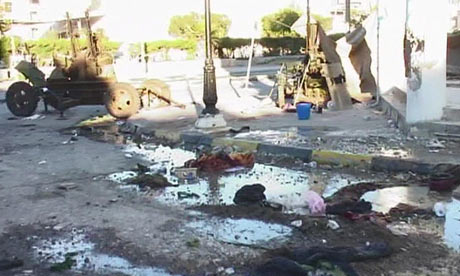 (Image by Unknown Owner)   Details   DMCA
Heavy fighting between Libyan rebels and forces loyal to Muammar Gaddafi has been reported in the city of Zawiya - Photograph: Sky News (Guardian Source)

Muammar Gaddafi apparently envisions himself as a modern Tamburlaine conquering a coveted city, without, however, going through the ritual custom of raising first the white flag demanding surrender, then the red flag promising bloody siege, and finally the black flag guaranteeing total annihilation. That would demand a certain dreadful nobility of character totally lacking in a megalomaniac who conflates human rights with treason against his own overbearing authority.

Gaddafi has not raised any flags at all, but simply attacked, attacked and attacked Zawiya, a city of some 200,000 people. Now reports are streaming in that terrible destruction is taking place this Tuesday, March 8, 2011. This is the style of an exterminator, who has repeated called protesters rats and cockroaches. His regime may also be trying to prevent reporters from investigating Zawiya, according to a Tweet from Guardian chief correspondent Peter Beaumont in Tripoli:

petersbeaumont:
Strong suspicion that the reason international media locked down by regime security waiting for Gaddafi is because of assault on Zawiya.
Even so, these Sky News videos and the reports following have made it out of Libya. It is a bloody, bloody situation, with control of the city in flux. Sky News correspondent Alex Crawford reports from inside of Zawiya that Gaddafi's forces DO NOT HAVE the city under control. The rebels, at a severe disadvantage in terms of firepower, nonetheless have tremendous spirit:

The attacks on the people of Zawiya resemble the American attacks on Fallujah, Iraq back in 2004 in many ways: army snipers are at work cutting down people; the ambulance Alex Crawford was riding in for a story was shot at while hospitals are also taking gunfire; their wards are overflowing with wounded professors, doctors, engineers, not just nebulous "militants"; even small children are being hit as armored vehicles and tanks are blasting away at civilian infrastructure. These are all war crimes:

Meanwhile, Anderson Cooper of CNN, using some of the above video footage as well as other sources, surgically dissects the Gaddafi regimes ongoing propaganda onslaughts HERE. Gaddifi, his sons and complicit officials are treating journalists hamstrung in Tripoli hotels like little children to be told fairy tales to about the upheaval taking place in Libya.

Also, From the BBC:

Pro-Gaddafi forces have launched a fierce attack on Libyan rebels in Zawiya, sources in the town say.

Casualties were reported as 50 tanks and 120 pick-up trucks launched three attacks on the rebel-held town 50km (30 miles) west of the capital, Tripoli.

"I don't know how many are dead - they tore Zawiya down to ashes," a source in the town told the BBC. (FULL ARTICLE HERE)

From the Guardian UK:

The regime of Colonel Muammar Gaddafi has launched a devastating assault on the opposition-held town of Zawiyah, deploying up to 50 tanks and scores of pickup trucks carrying troops.

Emerging accounts told of massive damage inflicted on the refinery town, which rose up against the Gaddafi regime two weeks ago. (FULL ARTICLE HERE)

I am a student of history, religion, exoteric and esoteric, the Humanities in general and a tempered advocate for the ultimate manifestation of peace, justice and the unity of humankind through self-realization and mutual respect, although I am not (more...)
Related Topic(s): Fallujah; Gaddafi The Torturer; Libya; Libya Revolution; Muamar Al Gaddafi; War Casualties; War Civilian Targets; War Criminal- Crimes, Add Tags
Add to My Group(s)
Go To Commenting
The views expressed herein are the sole responsibility of the author and do not necessarily reflect those of this website or its editors.