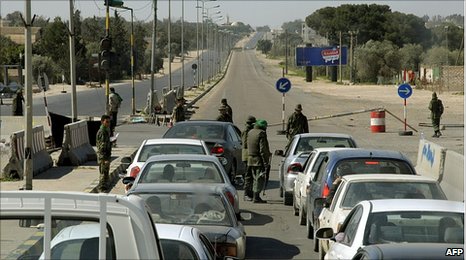 Perhaps several thousand Libyan citizens have already been slaughtered, many more thousands beaten, imprisoned, wounded or exiled. It is really a race against time now to defang Gaddafi before he can do maximum harm to the world, for he is already talking about blowing up oil facilities and spreading far more chaos. (source)

That quote is still just as timely today, if not more so, although the estimate of those murdered by his regime may now be around 6000, if not higher. Since Gaddafi apparently has the same attitude toward the press as Stalin or Hitler: regurgitate the propaganda and dictates of the State or die, disappear or otherwise be silenced, it is extremely difficult to investigate the real death toll. Moreover, Gaddafi's contempt for journalists seeking the truth includes not only Libyans but extends to foreign reporters and news teams as well, AND WITH EXTREME PREJUDICE AND SAVAGERY, as you are about to discover as you read the following chilling reports from the Guardian UK and the BBC. Note also that Gaddafi is also not only bombing his own towns and cities now, but also Libyan oil refineries Where will this all end if he is not stopped, and soon? (SEE HERE)

Here are the excerpts from the reports:

Two journalists working for the BBC in Libya say they were arrested, tortured and subjected to a mock execution by security forces of Colonel Muammar Gaddafi's regime.

The shocking account of their experiences, including being held in a cage in a militia barracks while others were tortured around them, was made available to media colleagues in Tripoli after the men had been released and left the country.

At one point during their captivity the men had shots fired past their heads as they were led into a barracks.

One of the men was attacked repeatedly with fists, boots, rifle butts, a stick and piece of pipe. He also described trying to help other victims of torture whom they saw, some of whom had had their ribs broken during beatings.

The ordeal represents the most serious incident yet involving the targeting of the international media and may offer an insight into the fate of many of those opposition supporters who have been rounded during the regime's crackdown on its opponents.

It also offers the first real eyewitness depiction of conditions endured by those arrested by the regime, including those whose only crime has been to talk to foreign journalists. (FULL ARTICLE CONTINUED HERE)

Libyan leader Col Muammar Gaddafi's security forces detained and beat up a BBC news team who were trying to reach the strife-torn western city of Zawiya.

The three were beaten with fists, knees and rifles, hooded and subjected to mock executions by members of Libya's army and secret police.

The men were detained on Monday and held for 21 hours, but have now flown out of Libya.

Government forces are in a fierce fight to wrest Zawiya from rebel control.

I am a student of history, religion, exoteric and esoteric, the Humanities in general and a tempered advocate for the ultimate manifestation of peace, justice and the unity of humankind through self-realization and mutual respect, although I am not (more...)
Related Topic(s): Attacks On Journalists Media; BBC; Crime; Gaddafi The Torturer; Guardian; Libya Revolution; Lies; Media Foreign; Media Journalists Endangered; Media Network BBC; (more...) Media Press Repression; Torture, Add Tags  (less...)
Add to My Group(s)
Go To Commenting
The views expressed herein are the sole responsibility of the author and do not necessarily reflect those of this website or its editors.