The latest, chilling authoritarian move from Republicans is to threaten legal action against a key player who assembled damaging information on Trump. 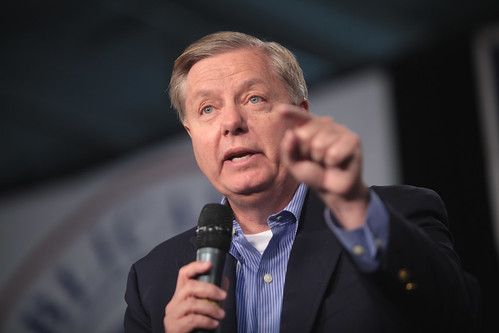 Five days into 2018 "and the "bombshell keeping falling," CNN's Brooke Baldwin announced Friday afternoon as she detailed the latest revelations about a Trump White House that seems to be careening out of control.

Between the new tell-all book where Trump aides depict the president as a childish fool completely incapable of fulfilling his duties, to stunning revelations about how Trump tried to force the United States attorney general to protect him from prosecutors, the Republican Party appears to be in panic mode.

And one way that complete panic manifests itself is the extraordinary efforts Republicans are taking in hopes of derailing ongoing Trump investigations, or creating news diversions by demanding probes into Trump's foes.

Friday brought another shocking, authoritarian move: Sen. Chuck Grassley (R-IA) and Sen. Lindsey Graham (R-SC) urged the Department of Justice to investigate British spy Christopher Steele to see if he lied to federal authorities about his contacts with reporters regarding information in the so-called Russian dossier.

Steele was hired in 2016, first by Republicans and then by Democrats, to assemble the widely confirmed intelligence document that detailed Trump's many shocking connections with Russian business operatives over the years, as well as the Kremlin's attempt to get him elected president.

In other words, Republicans are now actively going after a key player who tried to expose the wrongdoing of Russian collusion in the first place. Indeed, Republicans are waging an all-out war against those connected to the truth-telling dossier.

The latest GOP turn would basically be like if Republican senators in 1973 had demanded the FBI investigate Bob Woodward and Carl Bernstein as they uncovered the Watergate scandal.

As for Friday's criminal referral, which Democrats were not notified beforehand, the whole thing seems like a publicity stunt, albeit one designed to send a chilling message to people with uncompromising information about Trump.

Related Topic(s): Republican; Russiagate; Senator Charles Grassley; Senator Lindsey Graham; Steele Dossier; Trump Russia Connection, Add Tags
Add to My Group(s)
Go To Commenting
The views expressed herein are the sole responsibility of the author and do not necessarily reflect those of this website or its editors.