The Supreme Court and states have rejected fetal personhood, but Congress is slipping it into a college savings plan. 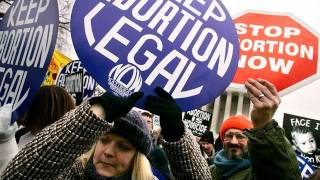 The GOP tax plan before Congress has billions in gimmicks and giveaways for corporate interests. But none may be as far-reaching, from a social policy perspective, as language declaring human fetuses are legal persons for federal tax purposes.

Having Congress or federal courts declare fetal personhood, as it is known, has been one of the anti-abortion movement's top goals for decades. That's because U.S. law is rife with rights and protections that are ascribed to persons, or to entities -- such as corporations -- whose behavior has human attributes. And as with so-called corporate personhood, which entered the American legal lexicon in the late 1800s, once that characterization becomes commonplace in law, it's virtually impossible to extricate.

"The GOP has chosen to hide this deeply unpopular and extremely dangerous provision deep in the tax code where they think no one will find it," wrote Ilyse Hogue, president of NARAL Pro-Choice America, for CNBC.com. "If it goes unnoticed and passes into the final bill, it will have succeeded where they have always failed: in establishing a definition of when life begins that goes against legal precedent, science, and public opinion."

There's a good reason the GOP tax bills are hiding personhood in an arcane provision. Despite a decades-long push by conservative Christians to create fetal personhood, the U.S. Supreme Court has not affirmed it in its abortion rulings. Nor have voters passed ballot initiatives creating fetal personhood, even in deep-red states such as North Dakota and Mississippi, even as it has appeared with more frequency in recent years. Neither have states passed fetal personhood bills, even though nine states introduced 13 bills in 2016. (Instead, abortion opponents have created other obstacles, from parental notification laws to waiting periods.)

But now the GOP has slipped a declaration of fetal personhood into a provision in the tax bill that would allow parents to create college savings accounts, known as 529 plans, for the unborn.

"Never mind that the provision is unnecessary: Americans can already set up 529s for the children they wish to have," NARAL's Hogue said. "A 529 that's already seeded with capital in a parent's name can be transferred to a child once that child is born... Never mind that the implementation would be a mess begging all sorts of questions as to when you get Social Security numbers and other identifying factors for children."

As Hogue and others who have studied the religious right and dominionist Christians have noted, the fundamentalist movement's goal is "to exercise dominion over society by taking control of political and cultural institutions." Thus, a sweeping GOP tax bill has become the vehicle: to create legal fetal personhood under the guise of a government-backed college savings program.

"The anti-choice movement knows this [ruse], but they simply don't care as their real intent was never to provide hard-working families a tax break," Hogue said. "It was something else entirely: As Jeanne Mancini of March for Life told Politico: 'A child in the womb is just as human as you or I yet, until now, the U.S. tax code has failed to acknowledge the unborn child -- all while granting tax breaks for those seeking an abortion under the pretense of 'healthcare'...The proposed tax plan is a huge leap forward for an antiquated tax code, and we hope this is the first step in expanding the child tax credit to include unborn children as well.'"

Hogue noted that other proposals in the tax bill are anti-student and penalize academia. The bills cut student debt relief in current law, she said, and would newly tax graduate school tuition grants.

Frederick Clarkson, a senior fellow now with Political Research Associates, has studied and written about the religious right and dominionist Christianity for decades. In 2016, he reported that the religious right was increasingly seeking to exempt itself from government oversight. However, now that the GOP controls the Congress and White House, it is not surprising that the fetal personhood cause is making headway in Washington.

Sen. Ted Cruz, R-TX, is the best-known dominionist leader in Congress, but he is not alone, Clarkson wrote in another piece that described the theocrat's goal as "defending the right of Christians to continue to hold cultural authority and privilege."

"Cruz and other national pols comprise the tip of a very large, but hard to measure political iceberg," Clarkson said. "There are untold numbers of dominionist and dominionism-influenced politicians and public officials at all levels of government and who even after leaving office, shape our political discourse."

"Roy Moore, the elected chief justice of the Alabama Supreme Court, has been a rallying figure for dominionists of all stripes for the better part of two decades," Clarkson continued. "Most recently, he [Moore] has led efforts to exempt Alabama from federal court ordered compliance with marriage equality, citing his view of 'God's law.'"

Steven Rosenfeld  covers democracy issues for AlterNet. He is a longtime print and broadcast journalist and has reported for National Public Radio, Monitor Radio, Marketplace,  TomPaine.com  and many newspapers. (more...)
Related Topic(s): Anti-abortion; Fetal Personhood; Gop Tax Bill; Religious Hypocrisy; Right Wingers Ruining America, Add Tags
Add to My Group(s)
Go To Commenting
The views expressed herein are the sole responsibility of the author and do not necessarily reflect those of this website or its editors.