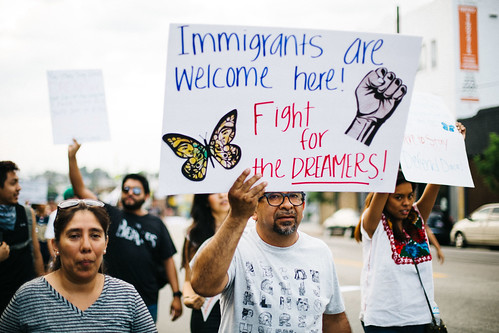 No one likes them.

Their popularity rates right up there with used car and timeshare salesmen.

They create a situation and then ignore the consequences.

Everyone else suffers while they take to the mountain top and boldly cry foul.

Republicans, yet again, you've outdone even yourselves.

Not everyone can claim the sorry title of -- Deadbeat Dads of DACA.

Did you really think no one would notice that you were the ones that created this quagmire?

Yes, the same party that allowed undocumented people to work for corporations all over America, for decades, with nary a hiccup or glance from the government, is now rejecting the children of the same people they enticed to come here -- even if they were invited through the backdoor.

Their lives didn't matter to you as long as they, and you, got paid. You surmised they would survive, without complaint. Future plans didn't fall into your grand scheme. Go on with your life and pretend we're not even here.

Your part of the deal was easy. Let it slide -- without any real protection to those you falsely gave hope. All you asked in return was that they do their job, keep quiet and slip under the radar. A difficult offer for most to turn down -- even you.

If your corporate buddies made money, and profits went up on the backs of hard working, underpaid labor, what concern was it of yours? You were just the middle man -- staying out of the way and providing a needed commodity.

To make it look good, you occasionally conducted plant raids that sent employees scurrying to the restrooms and parking lots. A simple, anonymous, phone call to management and they knew you were coming.

Turning a blind eye to corporations hiring of undocumented workers seemed well worth your efforts. Even Trump and Romney personally partook in this clever ruse, supposedly, without their knowledge.

There was always a lot of bluster about what should have been done. But often when any change was implemented it was usually taken on by the Democrats, who took immigration and its ramifications serious.