The Only Thing We Have To Fear Is Fear Itself 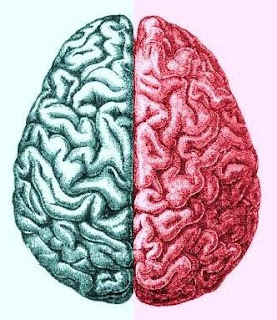 My parents were Republicans. They worried ...a lot. I often wondered what they worried about, but when I asked, the usual response was "Ya never know." They were children of the Depression and as such thought that another one was right around the corner. They also saved ...a lot. But a national catastrophe changed their party affiliation. It was called Vietnam. That and having a son on a fragile teacher's deferment. I never wound up going to Nam, and my parents never went back to being Republican, such was the legacy of Richard Nixon.

A new scientific study out of London has created a bit of a stir: for the first time, conservative and liberal brains were compared in physical terms with the emphasis on political thinking (not as much of an oxymoron as one would think).

"Previously, some psychological traits were known to be predictive of an individual's political orientation," lead author Ryota Kanai from University College London's Institute of Cognitive Neuroscience said in a statement. "Our study now links such personality traits with specific brain structure."

"Individuals with a large amygdala are more sensitive to fear," and might therefore be "more inclined to integrate conservative views into their belief system," Kanai and colleagues wrote. "On the other hand, our finding of an association between anterior cingulate cortex volume and political attitudes may be linked with tolerance to uncertainty" -- which may allow people to "accept more liberal views."

Sensitivity To Fear vs. Tolerance To Uncertainty.

We can certainly see these hypotheses played out in today's Christian Right and it's relation to the Republican Party. The Party's raison d'etre is playing to financial fears: "Social Security will be broke," "Big Government is using YOUR money to finance abortions," or "Democrats always raise taxes to pay for someone else's problems." To some, playing on people's fears is what religion is all about. Together, religion and conservatism are a powerful proponent of the worst fear: fear of the unknown.

Liberal minds, on the other hand, can process conflicting information easily and possess a more rational outlook: how can you fear something when you don't know what it is? Find out the details, work out the conflicts, leave an open mind and don't be so afraid of people or you pre-judge them without knowing them.

And who gets the sobriquet of "fearmonger" the most? Sean Hannity or Alan Colmes? Michele Bachmann or Barney Frank? Ann Coulter(geist) or Bill Maher? Progressives are more open to the future so that they can concentrate more on the present. 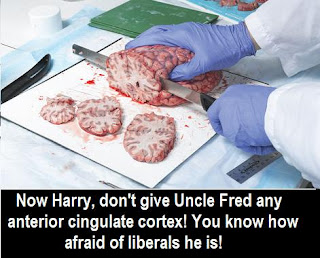 One of the biggest fear mongers today is Tony Perkins of Family Research Council: gay activists are going to "control the government," Obamacare is full of "death panels" and Planned Parenthood is out to "destroy the American Family." In fact, if you peruse Perkins' writings, you will be hard pressed to see any positive or mitigating factors to today's morals/"homosexual agenda"/pro-choice/feminist-ridden society. Nearly every daily email from the FRC or FRC Action!, besides headlined with the most awful of puns (he thinks he's being witty), is an alert to something dastardly happening on Capitol Hill or in the White House. Even his "Christmas Card" was a political warning of doom and gloom.

Of course, the study doesn't exactly let liberals get off the hook, either, at least not emotionally speaking: liberals tend to be more conflicted about problems and an inability to take definitive steps can result: e.g. the Democratic Party's reluctance to capitalize on certain aspects and the shortcomings of the Republican Party. Also: President Obama's eagerness to compromise has been seen as a sign of weakness by Democrats.

I can't help but think, however, that being a conflicted liberal is much better (for the sake of humanity) than being a fearful conservative. Fear can result in bigotry and, on the part of the Christian Right, a strong tendency towards a reactionary righteous arrogance.

Rev. Dan Vojir is has been writing/blogging on religion and politics for the better part of ten years. A former radio talk show host (Strictly Books €" Talk America Radio Network) and book publisher, Dan has connected with some of the most (more...)
Related Topic(s): Brain; Conservative Christian; Conservative Republican; Democrat; Family Research Council; Fear; Liberalism; Obamacare; Political Nutcase Psychos; Political Theatre; (more...) Political Values; Tolerance; Tony Perkins, Add Tags  (less...)
Add to My Group(s)
Go To Commenting
The views expressed herein are the sole responsibility of the author and do not necessarily reflect those of this website or its editors.