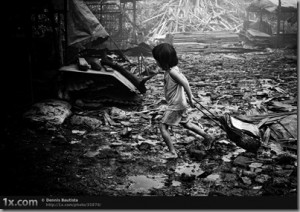 The ongoing, near-constant global ecological and environmental assaults we now face, the devastating wars, revolutions and political conflicts that seem ubiquitous these days, and the world-wide economic meltdown are permanently altering our sense of "normal."

There is no light at the end of the tunnel in sight, as a sense of permanent midnight is gradually seeping into our collective subconscious.

The stress of living under such a triple-threat is driving us crazy. Increasingly, we are attempting to cope as a nation by gobbling down record numbers of anti-depressants and anxiety medications like they were tic tacs. Aldous Huxley's Brave New World, with it's unbridled Capitalism and concomitant rations of mind-numbing Soma are upon us. Those less able to find legal medications are turning to alcohol and other drugs at an alarmingly high rate. Seems everyone is in rehab, recovery, or on mind-altering meds.

When it comes to our overall sense of job satisfaction, economic security, attitude toward global affairs, measure of personal safety, and general quality of life . . . we are in the gutter.  No longer does the young generation hope for a life and standard of living better than their parents enjoy. The loss of choices -- of colleges, of promising careers, of financial stability -- has led to a feeling of powerlessness and lack of control that is obvious in the apathy of so many of our young people. Foreclosures are at an all-time high, as is unemployment and a growing sector of middle-class homeless.  If the children are our future, they are a cynical, demoralized lot.

Who can blame them? It's difficult to remain positive and upbeat about the future when you've worked yourself through college (because your parents can't afford to pay for it anymore -- and government scholarship programs have been de-funded), struggling to finance a four-year college degree, only to find out there are no jobs available when your finally graduate. So you're back living in your parents' house (if it's not in foreclosure), working (if you're lucky) at Red Lobster, Best Buy or Wal Mart, helping pay the bills at home because one -- or both -- of your parents has been laid off from their job. Again.

The corporate war on workers and organized labor continues, with no end in sight. And they are winning (see: Wisconsin). They won't be satisfied until minimum wage is abolished and we're plunged back into serfdom (see: Michele Bachmann). Now they want to dismantle Social Security, Medicare, and Medicaid -- the only remaining social safety nets that keep most of us from drowning (see: entire Republican Party). Treading water, our noses barely above the surface, as the banksters and greedy corporate masters foreclose our homes and push our heads under the rising tide of our mounting personal and national debt.

And what of the returning soldier from Bush's never-ending, unwinnable, expensive and pointless terror wars so traumatized and riddled with PTSD over what they have seen and/or done that their young minds are permanently twisted. Broken, battered, traumatized and now forced to fight on another front -- against a government bureaucracy that denies their benefits, fights their claims, and underscores the feeling of expendability; they are useless now that they have served their duty. They failed at the one task they were charged to do -- fight, then die.

The war on science and intellectual curiosity has escalated to new heights, with the knuckle-dragging Rapture-ready Christian crusaders leading the charge to eradicate all traces of sound scientific theory from our text books. Replacing the Theory of Evolution with myths about talking snakes and images of Jesus riding a dinosaur. Abandon all proof of the true age of this planet and teach instead that  -- despite carbon-dating -- the Earth is a mere 5,000 years young. Even our elected politicians adopt this ridiculous pretext and we barely bat an eyelash.

The Scholastic Book Company publishes a propaganda piece aimed at middle-school students, extolling the virtues of oil and coal (written and funded by these industries) and we say nothing. We elect Presidents who can barely articulate a compound sentence, brag about their poor college records, and the masses clap and cheer their ineptitude and inanity, and turn a suspicious eye toward the few remaining rational scholars and creative thinkers who seek a better life for us all. What is our children learning?

We are descending again into a new anti-intellectual Dark Age, where forward-thinking scientists will be figuratively (or literally) burned at the stake.

Then there are the nuclear reactor disasters, triggered by environmental disasters, that threaten all life on this planet.  Disaster after disaster greets us on the cable news 24/7.

And still the politicians, the corporate rapists like the Koch brothers, the utilitarian murderers at BP, who have declared open-season on us working-class mortals, seeking only to advance their economic and environmental rampage like an endless army or marauding Roman soldiers.

After these and myriad other cataclysmic assaults, do we have the energy, the moral fortitude, the will or ability to stop this runaway train?

Kathy never expected a career in radio as a talk show producer. Born and raised in Atlanta, Georgia, Kathy was completing her nursing degree when in 2001 - in an emergency - she was asked to fill in as the producer of Mike's program. Within a few (more...)
Related Topic(s): Apathy; Corporate; Economic; Politicians; Pollution; Poverty, Add Tags
Add to My Group(s)
Go To Commenting
The views expressed herein are the sole responsibility of the author and do not necessarily reflect those of this website or its editors.