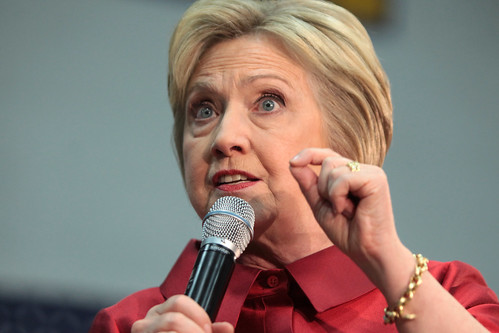 As the 2016 Democratic presidential nominee, Hillary Clinton has the opportunity to correct a mistake made almost a quarter century ago. She can reaffirm the party's commitment to full employment.

In the summer of 1944, a time when the country was still fully enmeshed in World War II, the Democratic Party told voters:

"To speed victory, establish and maintain peace, guarantee full employment and provide prosperity -- this is its platform."

For the next 44 years, 11 party platforms reaffirmed the party's commitment to full employment. The wording was often longer and sometimes comparably brief, but at each election the Democrats wanted to go on record as the party committed to full employment. Or at least they did until 1992.

That was the year that Bill Clinton won the Democratic presidential nomination. Bill Clinton quite openly described himself as a new type of Democrat. He distinguished himself from much of the party by supporting the death penalty, calling for "ending welfare as we know it," and backing pro-business trade deals like NAFTA.

For new Democrats, a platform plank on full employment was old-fashioned labor and union-type politics. Clinton and his team had no interest in making this sort of commitment, as a result the words "full employment" do not appear in the 1992 party platform.

It's now Hillary Clinton's party. She will have control of a clear majority of the delegates in Philadelphia next month. This means that if she wants to reaffirm the commitment to full employment, she will certainly have the ability to include the language in the platform. (Of course Sanders delegates are likely to be fully supportive, since in both his presidential campaign and his time in Congress, Senator Sanders has been a strong proponent of full employment policies.)

Full employment is likely good politics, but it is also good policy. The only time in the last four decades where most workers saw consistent growth in real wages was the low unemployment years of the late 1990s. The productivity gains of this period were broadly shared, with wage growth at the bottom end of the wage ladder actually somewhat more rapid than at the middle and top.

As president, Clinton will have an immediate opportunity to affect employment levels, since she is likely to come into office with at least two vacancies on Federal Reserve's Board of Governors. She will also have the opportunity to reappoint the chair, Janet Yellen, or name a replacement in her first year in office. If these appointees are committed to having the Fed maintain a policy of low interest rates it can have a substantial impact on the rate of growth of the economy and employment.

In addition to Fed policy, Clinton will also be designing budget and trade policies that can have a huge impact on both the level and composition of employment. On the budget, Clinton should be prepared to run deficits to finance infrastructure and other spending, especially when the economy faces a large and persistent demand gap (a.k.a. secular stagnation). She should also support jobs programs for the most disadvantaged to give them a foot into the labor market.

Our $500 billion annual trade deficit is the major cause of the demand gap we face. Clinton should pursue policies to lower this deficit, most importantly by reducing the value of the dollar which will make U.S. goods and services more competitively internationally. We will not get back the 4.4 million manufacturing jobs we've lost since Bill Clinton took office, but a smaller trade deficit could get back 1-2 million, and that would make a noticeable difference in the labor market.

It is often said that after parties approve their platforms they begin ignoring them immediately. There is much truth to this line. But it is more likely that a second President Clinton will take seriously a commitment that she has made than one she has not. It would be a big step forward if she reversed a mistake made by Bill Clinton and reaffirmed the Democratic Party's commitment to full employment.

Dr. Dean Baker is a macroeconomist and Co-Director of the Center for Economic and Policy Research in Washington, D.C. He previously worked as a senior economist at the Economic Policy Institute and an assistant professor at Bucknell University. (more...)
Related Topic(s): Bill Clinton; Hillary Clinton; Jobs; Unemployment, Add Tags
Add to My Group(s)
Go To Commenting
The views expressed herein are the sole responsibility of the author and do not necessarily reflect those of this website or its editors.