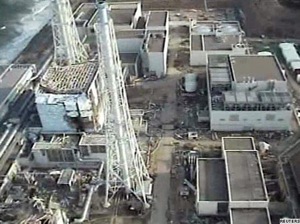 (Image by Unknown Owner)   Details   DMCA
The Fukushima nuclear reactors in Japan continues to smolder, burn and spew nuclear waste, but the big story is overshadowed by trivialities like a Weiner!
As the world is told that the crisis in Japan is contained and under control there is some anecdotal evidence that suggests otherwise! Is there a place in this story for conspiracy theorists?
Given the short attention span of the world, the Fukushima nuclear disaster in Japanand its aftermath has been firmly placed on the back-burner of global interest.
When story's like a rogue Weiner attacking women around the country through social media exist, what possible place could this ever evolving Fukushima nuclear disasterhave in the media or the publics minds?
The facts are however that the continuing crisis at the Fukushima complex appears to be far from over, and it appears to pose a high degree of danger not only to the people of Japan but to people around the world. A few facts:

The report spotlighted data from the  CDC 's Morbidity and Mortality Weekly Report on infant mortality rates in eight northwest cities, including Seattle, in the 10 weeks after Fukushima's  nuclear meltdown.

The average number of infant deaths for the region moved from an average of 9.25 in the four weeks before Fukushima' nuclear meltdown, to an average of 12.5 per week in the 10 weeks after. The change represents a 35% increase in the northwest's infant mortality rates.

So while human interest stories dominate the airwaves, keep in the backs of your minds that the crisis at Fukushima in Japan is not over. No matter how little attention it is getting!

From The Political Commentator written by Michael Haltman

Related Topic(s): Fukushima; Health- Radiation Sickness-Poison; Infant Mortality; Media Distractions Celebrities; Sex Scandals; The Earthquake-tsunami Crisis In Japan, Add Tags
Add to My Group(s)
Go To Commenting
The views expressed herein are the sole responsibility of the author and do not necessarily reflect those of this website or its editors.