Chuck was from New York. I was from Cleveland. We played football at Rensselaer, Indiana's Saint Joseph's College (SJC), which decades back served as a Bears training camp (see Brian's Song movie) before recently closing due to a $20,000,000 revenue shortfall. Most Pumas from our years, even those branded troublemakers from Aquinas Hall, are certain the administration can't blame it on too many football scholarships, George Halas's Bears, cafeteria food thievery, or the mysterious cornfield disappearance of Silver Bullet's (night watchman) car and keys to every room on campus.

Who's Who in American Colleges & Universities
(Image by Dwayne Hunn, from my SJC Year Book)   Details   DMCA

We were elected Student Body President and Secretary, and some less nefarious individuals put us in Who's Who in American Colleges & Universities. We acclimatized to windy cornfields, now sprinkled with revenue-generating windmills, partied in Chicago and Gary, and treasured those spring breaks with other buds in Chuck's white Valiant to Fort Lauderdale, where hot beaches and cold beers revealed, on our 2:00 a.m. arrival nights, bikinied beauties hanging from light-post stands and available for laborious environmental study, energy production, and demanding homework.

Back then we honored education so deeply we denied ourselves sleep to study the beaches and shapely two-legged creatures even under the pale moonlight. Our mother nature equipped, tuition-free, specimen-supplied laboratory -- pretty, study-inclined girls, blankets, soothing lapping tides floating in the warm air, backed by Moon River's lyrics drifting from a distant car -- were as close as one then got to analyzing non-existent rising tides. And none of our essential science studies were faked or subsidized news dictated via somnolent lectures. 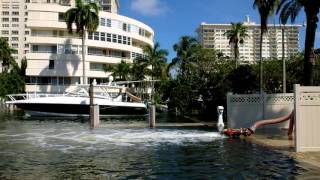 Tidal Valves in Fort Lauderdale No Match for Supermoon Flooding Tidal valves installed in two Fort Lauderdale isle communities were not a match for this week's King Tides that were amplified by a Supermoon. Both Riviera ...
(Image by YouTube, Channel: Sun Sentinel)   Details   DMCA

We still have many SJC Puma friends who missed those mind-expanding scientific forays and now, five decades after graduation, Chuck has deduced we were the school's only two liberals. I figure there were maybe four others, and none were named Dave and lived in Jasper, Indiana, the "Wood Office Desk Center Capital of the World."

Chuck majored in history, which I often pointed out to my roomie is just dead political science, which was my pulsating, triumphantly lively major, which in the age of Trump is even more thumpingly lively, while also more dangerously scary.

Upon graduation, I was immersed in the slums of Bombay, India, as a Peace Corps Volunteer. Chuck took impressive positions with J. Walter Thompson, International Harvester, Fiat, etc. In Chicago, he and Ellen raised and college graduated nine wonderful kids, and spawned 26 even cuter grandkids.

Today Chuck has no interest in another prestigious paycheck. In exchange for an occasional cup of coffee, he sells his work to groups like 350.org, Sierra Club, Rainforest Action Network, Save Our Illinois Lands, Blue Green Coalition, etc. He's usually the Non-violent Action Coordinator who talks with police leaders about how the demonstrators are going to peacefully protest. He likes the cops, and I can't imagine how they wouldn't like him, even though he has been among those peaceful protesters arrested, cuffed, and detained for a day.

No more dead history for Irish roommate Chuck. He's fired up and ready to go, even to overnight jail.

Why? Chuck got fired up and stepped beyond "ready to go" into pushing public policy because of such Guardian reports that:

- Extreme heat waves that once happened every three years now happen every 200 days.

- Even if we keep temperature rises within 2 centigrade Mother Earth, on average, will experience 60% more extreme rain events and 27 extremely hot days.

- Artic sea ice will vanish in about 40 years.

Perhaps most importantly, he's involved because he has neat kids and grandkids. And because he reads, thinks, and maybe has Catholic-imbued concerns about judgment day.

STAY IN THE KNOW
If you've enjoyed this, sign up for our daily or weekly newsletter to get lots of great progressive content.
Series: "Angry Mother Nature"