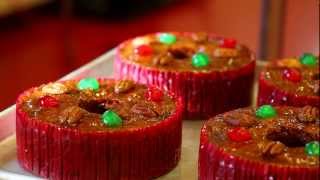 Holiday baking has taken on a new meaning with Trump in the White House. Fruitcake doesn't begin to describe it. Delusional psychopath with an extreme narcissistic personality disorder sounds more like it.

Almost a hundred American citizens have lost their lives so far in the worst wildfire in California history. More than 1,000 remain missing. Trump strutted around the smoking debris and later blamed the tragedy on lack of adequate raking. Like they do in Finland.

Uncaring, unfeeling, undignified, selfish monster. This is not a President.

Calling a brilliant life-long public servant Congressman Adam Schiff "little Adam Schitt" on Twitter. What a spoiled brat. How juvenile and decidedly UN-presidential. How much longer must we suffer this national embarrassment?

And now he's looking the other way -- yet again -- and forgiving the murder of a Washington Post journalist to appease another dictator. Again denying the reports of our own intelligence agencies in favor of a murderer. Like Putin. Like MBS. The State Department is now at war with the CIA and the Justice Department is at war with the FBI.

This must be the best year of Putin's life! And Kim Jong Crazy, and MBS, and Erdogan, and Duterte and el-Sisi.and Xi... there are more. These fascists gotta stick together, they learned that from the last two world wars. Trump is a dictator's wet dream. The perfect embodiment of American obsession with reality TV numbness and racism. White nationalism disguised as patriotism.

Abusing our veterans. Paying lip service to our troops while never visiting them abroad. Separating them from their families at Thanksgiving to fulfill a midterm lie about a hoard of terrorists and criminals advancing toward the Mexican border. Denying nearly 100,000 vets their rightful benefits due to extreme VA mismanagement. More homelessness, more suicides.

Our infrastructure is falling apart. We are besieged by hurricanes and wildfires. Further health care reform is desperately needed. Thousands live in squalor in HUD homes that Dr. Ben and his team can't manage. Our trade deals are a mess. And we are an international joke.

How long can the nation survive without a real President? Worse, with one who is actively working against the best interests of the American people?

Speaking of fruitcakes -- we have some for you if you're coming for a visit!

Kathy never expected a career in radio as a talk show producer. Born and raised in Atlanta, Georgia, Kathy was completing her nursing degree when in 2001 - in an emergency - she was asked to fill in as the producer of Mike's program. Within a few (more...)
Related Topic(s): Delusional; Donald Trump Versus The Constitution; Psychopath; Racism; Twitter, Add Tags
Add to My Group(s)
Go To Commenting
The views expressed herein are the sole responsibility of the author and do not necessarily reflect those of this website or its editors.