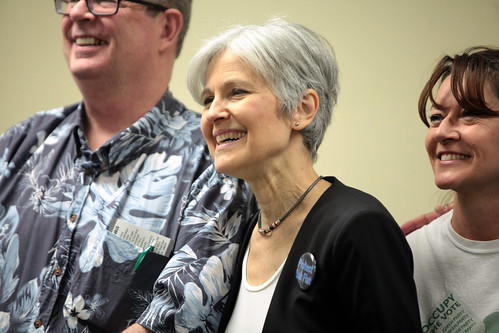 From the Jill Stein Campaign: Finally! The epic court battle we've been waiting for

"At the very outset of the recount, we filed a federal lawsuit declaring the state of Pennsylvania is failing to protect its citizens' constitutional right to vote. That suit has finally come up for a hearing, enabling us to utilize our volunteers' painstaking work to challenge Pennsylvania's regime of undemocratic, non-transparent and unaccountable elections".

"In Michigan, Trump's GOP cronies stopped the recount despite - or maybe because of - revelations about major problems with the vote count, particularly in under-resourced black and brown communities.

"In Wisconsin, although the law was on our side, many low-income communities of color most vulnerable to tampering never got the hand recount needed to verify the vote.

"But the worst mess was in Pennsylvania, where over 80% of voters use touch-screen machines with no tangible paper backup. These paperless voting machines are so vulnerable to hacking and so difficult to verify that they have been banned in most states.

"To make things worse, Pennsylvania law makes it virtually impossible for citizens to know whether their votes are actually counted. Thousands of volunteers mobilized in days to petition for recounts - only to be thwarted by a nightmare of bureaucracy."


Finally! The epic court battle we've been waiting for.

When we decided to initiate a recount, together with over 10,000 volunteers and 161,000 donors, we knew it wouldn't be easy.

But we had little idea how hard the political establishment would fight against transparent, accountable elections.

Related Topic(s): 2016 Elections; Court System; Jill Stein For President; Litigation; Michigan; North Carolina; Pennsylvania; Recount; Reform; Wisconsin, Add Tags
Add to My Group(s)
Go To Commenting
The views expressed herein are the sole responsibility of the author and do not necessarily reflect those of this website or its editors.

STAY IN THE KNOW
If you've enjoyed this, sign up for our daily or weekly newsletter to get lots of great progressive content.
Series: "recount"