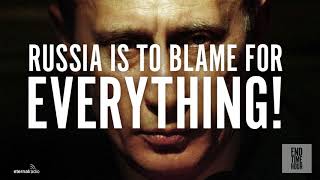 Russia is to Blame for Everything!
(Image by YouTube, Channel: End Time Hour)   Details   DMCA

Einstein said that the definition of insanity is to continue doing the same thing and expect different results. Isn't this what the Russian government is doing when it continues to respond to false accusations and expects facts to have any bearing on the matter?

As soon as the British orchestration of the "Skripal poisoning" was exposed as part of the ongoing plan to demonize Russia, the next false flag event is staged. Again, Syria is accused of a chemical attack against civilians. As the Syrian army is fighting successfully against Washington's mercenaries euphemistically called "rebels" even by Russian media, the accusation of a chemical attack against civilians makes no sense. It is well known that the "White Helmets" are a Washington propaganda organization whose mission is to foster fake news about staged events.

Nevertheless, the Russians again rose to the bait. General Yury Yevtushenko said that as soon as Douma is liberated Russia will send specialists to collect data that will expose the accusation as a fabrication.

As if Washington will care. Washington has already declared that Russia is responsible no matter who did it.

As long as Russia keeps responding to false charges, Washington's strategy of keeping Russia on the defensive responding to accusations will continue to work.

Related Topic(s): Blame Russia; Russia Bashing; Skripal Poisoning; Syria, Add Tags
Add to My Group(s)
Go To Commenting
The views expressed herein are the sole responsibility of the author and do not necessarily reflect those of this website or its editors.