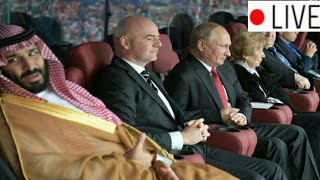 It started as an oil shock. After all, Russia and Saudi Arabia are on the verge of deciding what happens next, price-wise, in global energy markets.

Yet, way beyond Russia thrashing a pathetic Saudi Arabian team 5-0, the iconic takeaway in the Cup opener was Vladimir Putin's body language toward his guest, Mohammad bin Salman, in the VIP box in Moscow's Luzhniki stadium.

Russia -- or "the Kremlin," as the usual suspects insist on calling it -- spent only 10 billion euros (US$11.5 billion) to stage the FIFA World Cup. In fact, a little over half were federal funds; a third was private money, and the rest came from different Russian regions.

Talk about return on investment. Putin is even allowed the luxury of spurning Trump's invitation back to the G7 (the former G8). With the World Cup expected to draw a global TV audience of 10.8 billion spectators, Russia has ceased to be a "regional power" (Barack Obama). And we're not even talking about the Shanghai Cooperation Organization, now configured as the real heart of geopolitical action.

Across the West, the Sochi Olympics in 2014 were widely dubbed "the Putin games." For the bulk of Western corporate media, especially in the US, Britain, France and Germany, the 2018 World Cup is like an unshakeable, extended hangover. Embedded in any "sports" coverage is the usual "malign" litany: the "invasion" of Crimea; the "armed intervention" in eastern Ukraine; the support to "dictator Assad" under the "pretext" of fighting Daesh; the Russian "disinformation war" and cyber-war; the "interference" in the American elections; the assassination attempt against the Skripals on British soil.

If only "Western liberal democracy" could have boycotted the World Cup. But that's impossible, because of FIFA corruption. This is the case even after former spy Christopher Steele, of the infamous Steele dossier, collected "intelligence suggesting that Russian government officials and oligarchs close to Putin had been enlisted to push the effort, cutting shadowy gas deals with other countries in exchange for votes, offering expensive gifts of art to FIFA voters."

The fact that a later FIFA report cleared Moscow of any wrongdoing is immaterial. After all, the narrative goes, Russia is untrustworthy, and FIFA is as corrupt as Russia. Worse, both FIFA and Russia are immoral. Human Rights Watch released a 44-page report alleging "abusive labor practices" by stadium construction workers, not to mention "discrimination and violence against LGBT people," plus a ubiquitous involvement in "abusive military operations jointly with government forces in Syria."

There's no escaping the evil dark tentacles of the Putin alternative reality machine. The World Cup turbo-charged the narrative of Putin using football as an instrument of propaganda and power, forcing oligarchs to build stadia so they might be left alone to "prosper," in Russia and abroad.

Enter, for instance, strategic Kaliningrad, the enclave between Poland and Lithuania that is very much in NATO's sights. Putin wanted a 35,000-seat stadium in Kaliningrad -- bound to remain a cathedral in the desert. The company that built the stadium is owned by Azeri billionaire Aras Agalarov, a close pal of President Trump, with whom he organized the 2013 Miss Universe pageant in Moscow. Agalarov may have been the conduit for the meeting of Donald Trump Jr. and lawyer Natalia Veselnitskaya featured in Robert Mueller's investigation.

Corrupt FIFA, Putin's World Cup and Russia-gate; the serpent eats its own tail.

And yet the Global South couldn't care less. Football may have been turned into a demented, multi-trillion-dollar mega-corporate geoeconomic hydra, but football is the preeminent global pop culture. The appeal of Messi, CR7, Neymar, and now that guy from Egypt called Mohammad, dwarfs any entertainer. And as far as rolling, cliffhanging, binge entertainment goes, especially in the knockout stages, where every single match is an epic drama, no Netflix series beats the World Cup. In Brazil in 2014, in Russia now, in Qatar in 2022, across NAFTA in 2026.

Add to this the spicy, fiery political overtones of nationalism translated to the football pitch and broadcast to the whole world, dwarfing any "populist" onslaught anywhere.

On the pitch, the World Cup may turn out to be a case of the EU3 -- Germany, France and Spain -- against the Mercosur 3 of Brazil, Argentina and Uruguay. Serious interlopers to watch will be the extremely talented Belgium and chaotically skillful Colombia.

Related Topic(s): Football; Olympics; Putin; Russia 2018 World Cup; Russia Bashing; Sanctions; Soft Power, Add Tags
Add to My Group(s)
Go To Commenting
The views expressed herein are the sole responsibility of the author and do not necessarily reflect those of this website or its editors.