Note to the reader: This column was originally written in mid-June. The "reality of Trump" has not changed. In fact, if anything he has become even more strident. As for the reality of the essence of the Repubs. --- essentially racist and xenophobic, but somehow hoping to hide it and reveal it only by dog-whistle rhetoric --- the difficulty of most of the rest of the party leadership (not including, e.g., Ted Cruz and Rick Santorum) in dealing with the Trump Phenomenon has only intensified.

M illard Fillmore was the 13th President of the United States. He succeeded to the position when the man to whom he had been Vice-President, Zachary Taylor, a "hero" of the Mexican War, died in office in 1850. Fillmore, a somewhat anti-slavery Whig, failed to get his party's Presidential nomination in 1852. When the Whig Party broke up in 1854, Fillmore had a choice. He could have gone with the newly formed Republican Party, which was anti-slavery, at least on the question of the expansion of the practice to the Western territories, as many "Northern Whigs" did. He chose instead to join the newly formed American Party, the political wing of the militantly anti-immigrant, anti-Catholic movement known as the "Know-Nothings." He in fact was its Presidential candidate in 1856.

Running as that third party candidate, Fillmore was possibly responsible for the loss by the Republican John C. Fremont, which led to the election of the pro-Southern Northerner, James Buchanan, which led directly to the election of Abraham Lincoln, Southern secession, and the First U.S. Civil War. 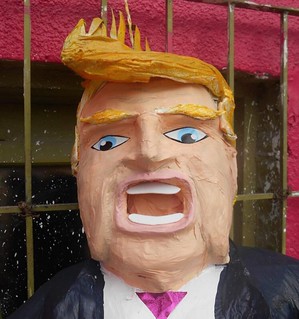 Fillmore's American Party/"Know-Nothings" "promised to purify American politics by limiting or ending the influence of Irish Catholics and other immigrants, thus reflecting nativism and anti-Catholic sentiment. It was empowered by popular fears that the country was being overwhelmed by German and Irish Catholic immigrants, whom they saw as hostile to republican values and controlled by the Pope in Rome." The prime saying of the Fillmore's 1856 campaign was: "I know nothing but my country, my whole country, and nothing but my country." The American Party disappeared shortly thereafter.

Fillmore stayed active in politics. He was still generally a "Northern Whig" type, anti-slavery to a certain extent, and represented a certain type of right-leaning Republican. Thus he opposed Lincoln and specific Republican policies during the Civil War, most especially the Emancipation Proclamation. Although of course Reconstruction at first represented Republican policy towards the South. But over time support for it in the GOP began to weaken. The emerging corporate sector, which had been behind the Whigs and their government-sponsored infra-structure programs (like the Trans-continental railway), began the takeover of the Party which would conclude with the abandonment of Reconstruction in 1877. At that point, Nativists of the Fillmore type, more than happy to turn their backs on the problems of the newly-freed slaves in the South, along with many members of the Temperance Movement, began migrating to the reconstituted Republican Party. (I have also dealt with the formation and transformation of the Republican Party in an earlier column, on OpEdNews.)

The targets of Nativism changed over time. Older immigrants, like the Irish and the Germans, came to be more accepted and newer ones like the Italians and the Jews, took their place as convenient scapegoat. Nevertheless, with the changing targets, Nativism itself has remained a part of the Republican Party ethos ever since that time. Interestingly enough, while the Temperance Movement heritage of the Republican Party was certainly the prime mover in creating Prohibition, Nativism had a role to play in passing it too, in aiming at the supposed "German" alcoholic beverage, "beer," the supposed "Irish" alcoholic beverage of choice, whiskey, and the supposed "Italian" alcoholic beverage of choice, wine. Then when Prohibition was at its height, the Republican Party passed the Immigration Act of 1924. It severely limited immigration from Southern and Eastern Europe, and totally excluded Asian immigration. At this time, Republican Nativism and "Temperance" went hand-in-hand.

And so we come down to the present time. Certainly the "anti-immigrant" strain of Republican Nativism has once again been playing itself out, for the last 20 years or so. This time of course, it is arrayed against Latino immigrants, especially undocumented ones. They have been fleeing ongoing unemployment and (U.S.-caused) drug war-related violence in their native countries, to come to the U.S. which, while on the one hand arresting the ones it can catch and deporting some of them, on the other hand has employers only too happy to take advantage of their cheap labor and natural docility in the workplace.

As is well-known, the Republicans have been riding this one for years. The last thing most Republican politicians want to do is immigration reform of any stripe for it rob them of the Nativist them which so much of the Republican base can get so excited about over-and-over again. Even a Republican President, George W. Bush, in 2007 could not get a somewhat reasonable reform plan through a Republican-controlled Congress.

But over the years, except in the mouths of such outliers as Rep. Steve King of Iowa, the rhetoric has not been too outlandish. Until now. Here comes Donald Trump, sounding as if he had just come out the American Party/"Know-Nothings" nominating convention in 1856. The now widely circulated quotation is:

"When do we beat Mexico at the border? They're laughing at us, at our stupidity. And now they are beating us economically. They are not our friend, believe me. But they're killing us economically. The U.S. has become a dumping ground for everybody else's problems. . . . When Mexico sends its people, they're not sending their best. They're not sending you. They're not sending you. They're sending people that have lots of problems, and they're bringing those problems with us. They're bringing drugs. They're bringing crime. They're rapists. And some, I assume, are good people. But I speak to border guards and they tell us what we're getting. And it only makes common sense. It only makes common sense. They're sending us not the right people. It's coming from more than Mexico. It's coming from all over South and Latin America, and it's coming probably-- probably-- from the Middle East. But we don't know. Because we have no protection and we have no competence, we don't know what's happening. And it's got to stop and it's got to stop fast."

In a party awash in repugnant and even ludicrous figures, Donald Trump manages to stand out. His impossible to miss arrogance makes all those sycophants on his show, The Apprentice, look even worse. Ironically, as noted above, nativists persecuted Germans at one point, but that thought could not possibly trouble Trump, himself of German descent, as the man most likely does not see the irony in fact.

The broad Republican response has been muted for the most part, although Karl Rove, Mr. Republican Establishment, did call Trump a "complete moron." (One must wonder what the difference is between a "complete moron" and an incomplete one, but that's another story.) Nativism has been in the bone marrow of the Republican Party almost since its beginnings. It just took Donald Trump (whose worst feature really is not his hair, folks) to, on the national stage, bring it to the surface once again.

Steven Jonas, MD, MPH, MS is a Professor Emeritus of Preventive Medicine at StonyBrookMedicine (NY) and author/co-author/editor/co-editor of over 35 books. In addition to his position on OpEdNews as a "Trusted Author," he is a Senior Editor, (more...)
Related Topic(s): Donald Trump; History; Immigration; Irony; Politics; Republican; Rhetoric; Temperance; Undocumented, Add Tags
Add to My Group(s)
Go To Commenting
The views expressed herein are the sole responsibility of the author and do not necessarily reflect those of this website or its editors.