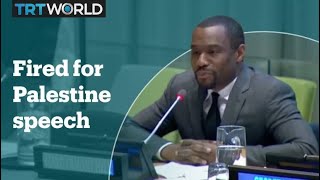 CNN commentator fired after 'free Palestine' speech at UN Marc Lamont Hill, a CNN commentator, has been fired after giving a speech on the Israel-Palestine conflict at the UN. #MarcLamontHill, #CNN, #Palestine.
(Image by YouTube, Channel: TRT World)   Details   DMCA

For 30 years, the United Nations has held an annual International Day of Solidarity with the Palestinian People on 29 November. The event rarely merited even a passing nod in the mainstream media. Until last week.

Marc Lamont Hill, a prominent US academic and political commentator for CNN, found himself deluged by a tsunami of outrage over a speech he had made at the UN headquarters in New York. He called for an end to Oslo's discredited model of interminable and futile negotiations over Palestinian statehood -- a strategy that is already officially two decades past its sell-by date.

In its place, he proposed developing a new model of regional peace based on a single state offering equal rights to Israelis and Palestinians. Under a barrage of criticism that his speech had been anti-semitic, CNN summarily fired him.

His dismissal echoes recent, largely confected furores greeting attempts by organisations to take a more practical and ethical stance on the Israeli-Palestinian conflict. Both Airbnb, an accommodation bookings website, and the UK branch of the Quakers, a society of Christian religious movements, have faced howls of indignation in response to their modest initiatives.

Last month, Airbnb announced that it would remove from its site all properties listed in illegal Jewish settlements on Palestinian territory in the West Bank. Shortly afterwards, the Quakers declared that they would refuse to invest in companies that profit from Israel's theft of Palestinian resources in the occupied territories.

Both moves fully accord with international law, which views the transfer of an occupying powers' population into occupied territory -- the establishment of settlements -- as a war crime. Again, like Hill, the two organisations were battered by adverse reactions, including accusations of malevolence and anti-semitism -- especially from prominent and supposedly liberal and representative Jewish leadership groups in the US and UK.

What all three cases illustrate is how the definition of anti-semitism is being rapidly expanded to encompass even extremely limited forms of criticism of Israel and support for Palestinian rights. This redefinition is occurring at a time when Israel is led by the most intransigent and ultra-nationalist government in its history.

These two trends are not unrelated. The cases in question also reveal the growing weaponisation of an emotive identity politics that has been turned on its head -- depoliticised to side with the strong against the weak.

Of the three "controversies", Hill's speech offered the biggest break with western orthodoxy on how to resolve the Israeli-Palestinian conflict -- or at least an orthodoxy established by the Oslo agreements in the mid-1990s. Those accords intimated that, should the Palestinians wait patiently, Israel might one day concede them a state on less than a quarter of their homeland.

Some 25 years later, the Palestinians are still waiting, and most of their proposed state has in the meantime been devoured by Israel's settlement-colonies.

In his speech, Hill put the Zionist movement's dispossession of the Palestinians in its proper historical perspective -- one increasingly recognised by academics and experts -- as a settler-colonial project.

He also correctly noted that the chance for a two-state solution, were it even feasible, has been usurped by Israel's determination to create a single state over all of historic Palestine -- one that privileges Jews. In Greater Israel, Palestinians are doomed to be treated as lesser human beings.

History, Hill observed, suggests there is only one possible ethical resolution of such situations: decolonisation. That recognises the existing reality of a single state, but insists on equal rights for Israelis and Palestinians.

Rather than challenge Hill on the unassailable logic of his argument, critics resorted to inflammatory soundbites. He was accused of using anti-semitic language -- employed by Hamas -- in referring to international action to secure "a free Palestine from the river to the sea".

In a double leap of faulty logic, Israel and its apologists claimed that Hamas uses the term to declare its genocidal intent to exterminate Jews, and that Hill had echoed those sentiments. Dani Dayan, Israel's consul-general in New York, termed Hill "a racist, a bigot, an anti-semite", and compared his remarks to a "swastika painted in red".

Ben Shapiro, an analyst on Fox News, echoed him, claiming Hill had called for "killing all the Jews" in the region. Seth Mandel, the executive editor of the Washington Examiner, similarly argued that Hill had urged a "Jewish genocide".

Related Topic(s): Airbnb; Anti-semitism; Boycott; Criticism Critics; Israel; Israel Runs Washington; Israeli Protests; Israeli Settlements; Israeli-palestinian; Palestinian; (more...) Politics; Truth, Add Tags  (less...)
Add to My Group(s)
Go To Commenting
The views expressed herein are the sole responsibility of the author and do not necessarily reflect those of this website or its editors.