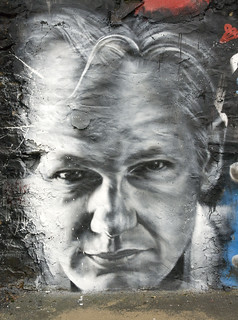 French President Francois Hollande has rejected suggestions that his government grant asylum to WikiLeaks founder Julian Assange, in the wake of revelations by the Internet organization of illegal spying on several French leaders by the US National Security Agency.

Hollande's office issued a perfunctory one-paragraph press release Friday declaring, "France cannot act on his request," in response to a lengthy open letter from Assange published earlier in the day by the leading French daily newspaper Le Monde. "I am a journalist who has been pursued and threatened with death by US authorities because of my professional activities," Assange wrote.

Hollande denied that Assange's life was in danger because of American persecution, as he claimed in the open letter. "The situation of Mr. Assange does not present an immediate danger," his office said.

The cynical and dismissive tone of this reply only underscores the gross hypocrisy of the French president, who issued numerous puffed-up declarations about freedom of the press in the wake of the massacre at the offices of Charlie Hebdo magazine in January, perpetrated by two Islamist gunmen.

Hollande was happy to march at the head of the parade when it came to defending a magazine engaged in scurrilous attacks on Muslims. But when it is a matter of an Internet publication that has courageously exposed the crimes of the most powerful imperialist power, the United States of America, the president of France is rather less vocal and hides behind his lawyers. Assange "is subject to a European arrest warrant," his statement argues.

Baltazar Garzon, the renowned Spanish jurist who is Assange's principal lawyer, issued a statement in response to the French media reports, denying that Assange had made any formal request for asylum in France, which is a cumbersome and lengthy legal process.

Le Monde pointed out that Assange's open letter makes no mention of asylum but instead seeks French support and diplomatic protection against his persecution by the United States, Britain and Sweden.

Whatever their exact nature, it seems clear that feelers had gone out from the WikiLeaks founder and his supporters to French officials. Last month, the whistleblower website published material on US government spying on French presidents Chirac, Sarkozy and Hollande himself. There was a brief media furor in France, but the French government clearly did not want to inflame relations with Washington or draw attention to the draconian domestic spying bill it was passing through parliament at the time.

The matter was allowed to drop after a formal French complaint to the US ambassador.

However, in the course of that episode, French Justice Minister Christiane Taubira suggested in a television interview that France might offer protection to both Assange and former NSA contractor Edward Snowden, now living in exile in Russia after his 2013 expose of massive illegal NSA spying around the world.

"If France decides to do it, I wouldn't see anything shocking in that measure," Taubira said, noting that French laws provide "protection for whistleblowers."

A group of French civil rights activists then issued an invitation to Assange to visit the country. The WikiLeaks founder has been living in Ecuador's embassy in London for more than three years seeking to avoid extradition to Sweden, where he is being investigated on bogus allegations of sexual assault.

The charges were trumped up by a Swedish prosecutor either to silence Assange by jailing him for a lengthy period or to facilitate his extradition to the United States for trial and possible execution under the Espionage Act. The political motivation of the charges was demonstrated by their timing, coming soon after the first major WikiLeaks publication of internal US military reports from Iraq and Afghanistan, documenting numerous war crimes, and while top US government officials were calling for Assange's arrest and even assassination.

In his open letter to Le Monde, Assange revealed that his youngest child and her mother are both French and living in France, and he has been unable to see them since the US government campaign against WikiLeaks began in 2010.

Patrick Martin writes for the World Socialist Website (wsws.org), a forum for socialist ideas & analysis & published by the International Committee of the Fourth International (ICFI).
Related Topic(s): Extradition; Francois Hollande; French Media; Julian Assange; Propaganda; Wikileaks, Add Tags
Add to My Group(s)
Go To Commenting
The views expressed herein are the sole responsibility of the author and do not necessarily reflect those of this website or its editors.