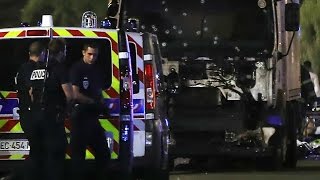 The French Anti-Terrorist Sub-Directorate has demanded that the authorities in Nice delete the recordings of the Nice Attack from the surveillance cameras that captured the attack.

I wonder why this order to destroy the visual evidence.

Could it be because the visual evidence shows the attack to be a false flag, a staged attack, or a faked attack orchestrated with crisis actors?

As I previously pointed out, the numerous photos available in the British media show no blood in the street, no blood on the truck, and no damage to the truck that allegedly has impacted 186 people. The police are shown standing exposed to gun fire a few feet from the truck cab firing into the cab that allegedly contained an armed person. Police do not take this kind of needless risk when confronting an armed suspect

The demand for destruction of the visual evidence is suspicious, to say the least. The only obvious reason for the demand is suppression of evidence.

Remember all of the surveillance cameras with recordings of whatever occurred at the Pentagon on 9/11? All of the recordings were confiscated. The official story is the recordings show the airliner hitting the Pentagon, but no recording has been released which shows the evidence that the government claims to have.

Whenever you see evidence withheld, destroyed, and demands for destruction of evidence as the French Anti-Terrorist police are demanding of city authorities in Nice, the safest conclusion is that the evidence is damning for the official story.

Notice that if RT understands what the story it reports means, RT is afraid to say so. Instead RT repeats the unverified official allegations that "weapons and grenades were found in the vehicle following the rampage," and "the attacker was aided by a tight-knit team of associates, who helped him sketch out his plan and acquired weapons for him."

In RT's defense, US officials have accused RT of being a "terrorist organization" and threatened to halt RT's broadcasting unless the media service pulls in its horns. See also here.

Related Topic(s): Evidence; French Media; Nice Attack; Police, Add Tags
Add to My Group(s)
Go To Commenting
The views expressed herein are the sole responsibility of the author and do not necessarily reflect those of this website or its editors.