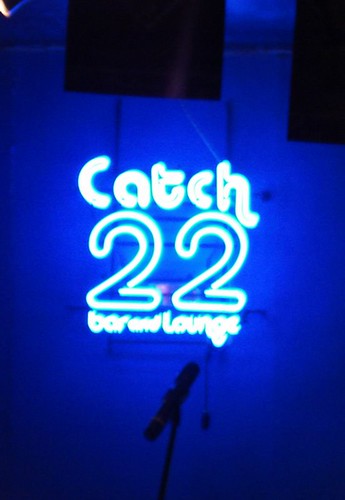 The Arms of Oops

Arl you done with that dumpring?

China asks on the sidelines.

Yes, all yours, Amerika says.

I was tarking to the Tariban, they crack down on us.

It's all happening now.

Proof of Life, a liqueur served up to the unfragged NCOs.

Asshats handed back. Assimilatos handed over.

skedaddled out of Seattle, hit the road to Uzi-stan.

Trophy women, all taste of the sugar, had to be culled

like fresh cut flowers at a florist for the dead.

Wake up and smell the coffin.

In the background, during the frenzied commissary grab,

Frankie Laine sang, "You Gave Me A Mounting,"

as the Folgers disappeared, as did the Burka Beer.

Domino's Pizza in the Green Zone, Kabul, has been non-stop,

feeding fleeing armies and incoming, too.

Half hour or less they wheel up in humvees with your order.

Tip 'em. Who needs the aggravation of their catcalls?

They call it New York style slices, but they might be snarking,

and who ever heard of IEDs mixed in with the mushroom clouds?

Rebels without a cause have gone all Thelma and Louise.

Some dumbshit left a smart TV behind,

a local warlord says in broken English. Broken and in despair.

They're rolling up the carpets,

the circus is leaving town,

and for all I know the passports have been browned

quoth a Dylanesque busker not from Duluth,

the Air Force left behind.

Yeti the biggest weasel of a problem

is Corn Pop Joe cutting off aid to Afghanistan

to squeeze and freeze the Taliban.

but Old Joe left behind billions of dollars in weapons

and in fact had some of the latest in transit

even as the sh*t was hitting the propeller

(paid for by the American taxpayer natch,

a fact the military deleted from the web, says Forbes.)

And now the poor starving locals

will have to go back to selling Afghans

and some of the world's sweetest opium.

as the leading supplier of epidemic-grade oxycontin.

But mostly selling all those Blackhawks,

and sacks of powdered eggs (at least, they call them eggs).

And now all those weapons will have to be sold

to China (shi -shi, shhhh) and Russia (who want their Klashies back)

and anyone else in need -- it's a free market world.