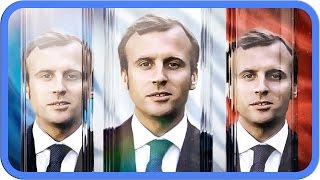 France's President Macron raised the stakes for war in Syria by claiming to have proof chemical weapons were used by the "regime" last weekend. Macron is thus making a joint military strike on Syria with the US more likely.

From the outset of the dubious chemical weapons incident on April 7 in the city of Douma, near the Syrian capital Damascus, US President Donald Trump has relied heavily on his French counterpart for guidance on what military action to take.

Bloomberg has described Emmanuel Macron as Trump's "go-to guy in Europe." The American president is said to trust Macron more than any other European leader. When the news of the alleged chemical weapons incident broke, it was Macron whom Trump phoned first -- much to the chagrin of the British and their presumed "special relationship" with Washington.

In a series of follow-up calls, the French reportedly exchanged intelligence with the White House to show that chemical munitions had been used against civilians by the Syrian government forces of President Bashar Assad. It seems it was due to the French lead that Trump adopted such a bellicose position, blaming "animal Assad" and Russian leader Vladimir Putin for the "atrocity."

Trump went on to warn Russia to get ready for "new, smart missiles coming." However, the president then appeared to quickly back down, later intimating that a decision on whether or not to launch military strikes had not yet been taken.

Significantly, France's Macron then weighed in with his categorical claim to "have proof that chemical weapons were used by the Syrian regime." This was while US Defense Secretary James Mattis said that they are still making an assessment about the purported incident.

Macron has previously said that not implementing "red lines on chemical weapons" is a sign of "weakness" which he will certainly not balk at. Given his categorical claim about chemical weapons being used by the Assad forces, that can only mean one outcome -- military action.

So, it seems the French leader is indeed Trump's "go-to guy" in Europe -- for war on Syria. What the precise French intelligence on the Douma incident is based on, and from where it was sourced, is not publicly substantiated. It is unverified -- as with so much else Western governments claim these days. We are expected to simply take the word of the French president. Though, that's entirely questionable.

For its part, the Syrian government has unequivocally rejected accusations its forces used chemical munitions in recapturing Douma and its Eastern Ghouta environs. Syria and Russia say the alleged incident was a staged provocation carried out by the Western-backed insurgents. The strategic victory has routed the last-remaining stronghold of the anti-government militants near the capital. As President Assad remarked, the staged provocation was aimed at distracting from the military breakthrough against the Western-backed regime-change proxies.

Russian chemical warfare analysts, as well as locally-based Red Crescent medics at Douma City hospital, have also found no traces of chemical weapons, or people showing symptoms of poisoning. A World Health Organization claim that "500 people were injured with chemicals" is not based on its own on-the-ground information-gathering, but rather on the claims of "activists in the area" -- which probably means the notorious White Helmets, the so-called rescue group which is embedded with terrorist outfits like Al-Nusra Front and Jaysh al-Islam.

Therefore, how can President Macron be so confident to have proof under the circumstances? He cannot possibly have the evidence he claims to have. He is either lying or willfully peddling allegations communicated by the White Helmets and other proxies which have been exposed as on the payroll of the French government, as well as the CIA and Britain's MI6.

In this way, Macron is reprising the role played by former British leader Tony Blair when the latter served as the public relations manager to the George W Bush administration over the Iraq War. Like Blair, Macron lends Trump a certain gravitas upon which to launch a war.

If there is one outstanding trait in the 40-year-old French leader, it is his ruthless ambition. The former investment banker has a knack for climbing up greasy poles. He has endeavored to position himself as the pre-eminent European leader, eclipsing Germany's Angela Merkel or Britain's Theresa May, as the point man for Washington.

Later this month, he will be the first European leader to be given an official state reception in Washington -- a gesture from Trump in response to Macron's guest-of-honor invitation at the Bastille Day celebrations in Paris last year.

Related Topic(s): Assad; Chemical; Emmanuel Macron; France; Syria; Weapons, Add Tags
Add to My Group(s)
Go To Commenting
The views expressed herein are the sole responsibility of the author and do not necessarily reflect those of this website or its editors.