"He is the only one who seeks to punish Iran, to increase sanctions. All the others are searching for a solution." 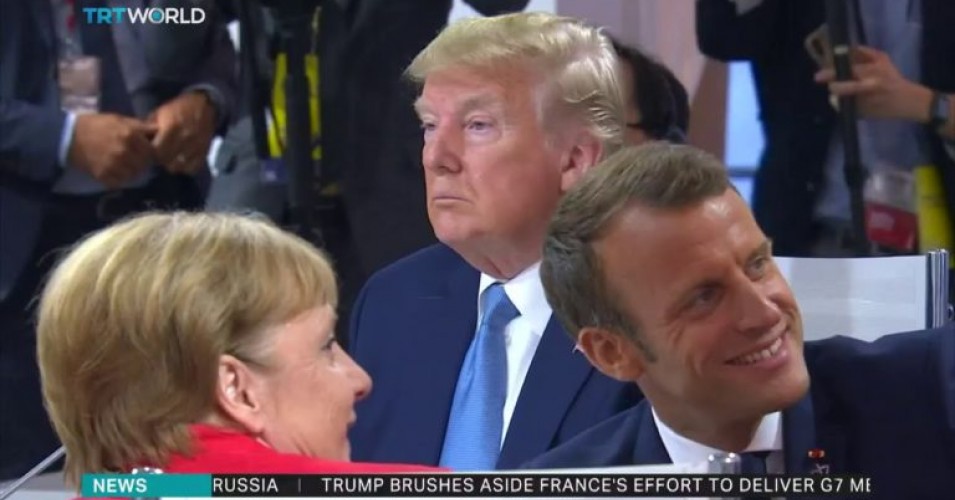 Trump breached the Iran deal in 2017, slapped severe sanctions on Iran and then went around the world strong-arming countries not to buy Iran's petroleum.
(Image by (Photo: Screenshot))   Details   DMCA

In a surprise development, Iranian foreign minister Javad Zarif suddenly flew to Biarritz on Sunday for meetings on the sidelines of the G7 summit. He clearly was invited at the instance of French President Emannuel Macron, who is still attempting to salvage what he can of the 2015 Iran nuclear deal, which restricted Iran's enrichment activities.

The treaty was signed between Iran and the five permanent members of the UN Security Council plus Germany. Trump breached the Iran deal in 2017, slapped severe sanctions on Iran and then went around the world strong-arming countries not to buy Iran's petroleum. All this, even though Iran faithfully lived up to every provision of the treaty. The sanctions have indirectly provoked a crisis in the availability of medicines in Iran.

Le Journal de Dimanche reports that Macron, representing France, Germany, Britain and Japan, said, "One must have a discussion at the summit on how to deal with the Iran dossier; there are real disagreements at the core of G7, with three European powers and Japan having a quite clear position, entirely assuming a rapport with Iran, and the Americans ... who decided to completely change the line."

The paper says the group of four will attempt to convince Iran to backtrack on its decision to begin violating, at least in minor ways, some terms of the nuclear deal. In return, they will then press Trump to back away from his current policy of maximum pressure in Iran, which has resulted in a de facto blockade on Iranian petroleum sales.

France info quotes former French ambassador to Iran, François Nicoullaud as saying that something big must be up.

"Zarif is a man of compromise, closely monitored by the radical conservatives," he said. "He is taking a big gamble in even coming to Biarritz. If he came, it must be because he has something waiting for him there."

Nicoullaud continued, "It is unthinkable that France did not forewarn the US, even though that would certainly have provoked a crisis. Trump did not approve of the notion of such a contact, but he left the French free to intervene. It must be said that Trump is isolated at the G7 on this subject. He is the only one who seeks to punish Iran, to increase sanctions. All the others are searching for a solution. The US seems to be saying to France, Go on, then -- we'll see. They are very skeptical, but don't block the others from acting."

Related Topic(s): France; G7 Meeting; Iran; Sanctions; Trump Anger; Trump Foreign Policy, Add Tags
Add to My Group(s)
Go To Commenting
The views expressed herein are the sole responsibility of the author and do not necessarily reflect those of this website or its editors.