Bush has often gotten out of jams by dint of personal charm, and he’s trying that once again. 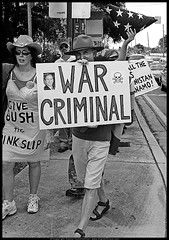 (Image by Unknown Owner)   Details   DMCA
Image by danny.hammontree via Flickr Times are tough for the country and the world but it seems that things aren't so great for former President George W. Bush.

Bush now faces one of his toughest challenges.

He has to convince the wealthy of the world to contribute 300 million to his library. At first thought, you would think that it would be quite easy for the former President to gather 300 million from wealthy donors.

After all, the super rich owe their President a lot. They were able to profit handsomely from America's wars. They were able to amass greater fortunes because of Bush's support for economic globalization and an American economy that made Reagan's "trickle down" seem somehow progressive. But most importantly when there was a possibility that the super rich might lose some of those super riches, Bush stepped in and in a matter of a week or so he came up with a trillion or 2 to help out.

So what's the problem?

Well there is some complaining at Southern Methodist University in Dallas about the President having his library there. Also, the economic depression and the endless wars has made the former President awfully unpopular among common Americans. I guess the super rich don't want to make the rabble any more upset then they already are.

But Bush is a fighter. He has faced tough challenges in the past and if anyone can build himself a library worth hundreds of millions of dollars, it is our former Commander-in-Chief.

But I do hate to see the former President have to interrupt his biking, speaking engagements, golfing (oh, I guess he gave that up because he says he felt sorry for all of the people he killed), writing of his memoirs, fine dining, parties, and social fun by having to worry about his library.

But I have a plan that I think could help out the former President.

I believe that Bush needs to do more than offer to build the library. If he were to offer to create a memorial within the library for the tens of thousands of dead and wounded American soldiers, the millions of war torn Iraqis and Afghans, and even the tens of millions of Americans ravaged by Bush economics then I am sure he could gain a lot more support for the project. If he offered to build this memorial along with his library then it might create a groundswell of support for the work to proceed.

Come to think of it, Bush could also include sections in the memorial to those tortured, enemy combatants, assassinations authorized by the Administration, illegal wiretapping, the shredding of the constitution, and the art of propaganda and the big lie. I am sure those additions to the library/memorial would really build some excitement among progressives and liberals in the country.

I know I am missing some things that could be included in the library/memorial. But the former President should ultimately be the one to decide on what he wants to add. Or he can do like he did during his Presidency, and turn everything over to the Head of Assassinations, former Vice President Cheney. Then Bush could just do what he does best.