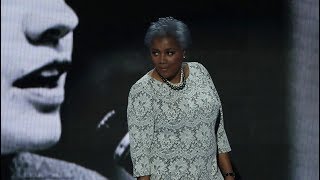 The Hillary Clinton campaign used its financial resources to take control of the Democratic National Committee more than six months before the first primary vote, using the party machinery to insure Clinton won the presidential nomination, according to a new book by a top Democratic insider.

Donna Brazile, longtime vice chairman of the party, campaign manager for Al Gore in 2000, and interim chairman of the DNC from July 2016 to February 2017, makes the explosive revelation in her newly published account, Hacks: The Inside Story of the Break-ins and Breakdowns that Put Donald Trump in the White House.

A chapter of the book was excerpted Thursday on the Politico website, under the headline, "Inside Hillary Clinton's Secret Takeover of the DNC." Brazile writes that soon after she became interim chairman after the Democratic convention in July 2016, she began investigating charges of collaboration between the previous DNC chair, Representative Debbie Wasserman Schultz, and the Clinton campaign.

The DNC was near bankruptcy, and Clinton campaign manager Robbie Mook agreed to pay off its $10 million debt and provide a monthly stipend, which ultimately totaled another $10 million. Brazile continues: "in exchange for raising money and investing in the DNC, Hillary would control the party's finances, strategy, and all the money raised. Her campaign had the right of refusal of who would be the party communications director, and it would make final decisions on all the other staff. The DNC also was required to consult with the campaign about all other staffing, budgeting, data, analytics, and mailings."

Brazile admits the grossly anti-democratic character of this arrangement, given that the Democratic presidential nomination was a contest between at least five candidates at that point, two of them, Clinton and Sanders, with substantial support. In all previous such contested races, the rules of the DNC had required it to remain neutral.

"The funding arrangement with HFA and the victory fund agreement was not illegal," she claims, "but it sure looked unethical. If the fight had been fair, one campaign would not have control of the party before the voters had decided which one they wanted to lead. This was not a criminal act, but as I saw it, it compromised the party's integrity."

Brazile is defensive about the legality of the arrangement for good reason: it involved a brazen effort to evade restrictions imposed by federal campaign finance laws, which limit to $2,700 the amount that an individual can give to a presidential campaign.

Under the deal brokered with the DNC, wealthy donors could pump $353,400 into the party's coffers, $10,000 to each of 32 state parties that participated in the scam, and $33,400 to the DNC itself, in each case, the maximum allowed under federal law. All these funds would be deposited in the accounts of the various state parties and the DNC. Most states would send their money back to the DNC, and the DNC would funnel the whole sum to the Clinton campaign. In the end, the state parties retained less than one percent of the $82 million raised in this effort.

Similar money trails have been a staple of both Democratic and Republican fund-raising efforts for the last several presidential election cycles, but the 2016 campaign was the first in which such flimflam was conducted before the party had selected a presidential nominee, and months before a single vote had been cast in a caucus or primary.

There are several important aspects of the Brazile account. It confirms that the DNC emails released by WikiLeaks -- which the US intelligence agencies and the media claim, without providing evidence, were obtained through Russian hackers -- provided an accurate picture of the collaboration between top DNC officials and the Clinton campaign. The leaked emails were damaging to Clinton because they were true, not because they were false, or "fake news."

Some 12 million people, with a preponderance of youth and students, voted for Bernie Sanders in the Democratic primaries and caucuses, attracted by his claim to be a socialist and his denunciation of the grip of "millionaires and billionaires" on the US economy and political system.

But he was seeking the presidential nomination of one of the two parties controlled by the billionaires and unshakably committee to their interests, as demonstrated by the blatant purchase of the DNC for $20 million by Hillary Clinton, the favored candidate of the financial aristocracy in 2016.

The US ruling elite was shocked and surprised by the mass support for a candidate claiming to be socialist -- none more so than Sanders himself. His major service to Wall Street was to divert this popular following back into safe channels, by wrapping up his campaign and throwing his support to Hillary Clinton at the convention.

Patrick Martin writes for the World Socialist Website (wsws.org), a forum for socialist ideas & analysis & published by the International Committee of the Fourth International (ICFI).
Related Topic(s): 2016 Campaign; Bernie Sanders; Campaign Ethics; Democratic Party; Hillary Clinton; Wikileaks, Add Tags
Add to My Group(s)
Go To Commenting
The views expressed herein are the sole responsibility of the author and do not necessarily reflect those of this website or its editors.