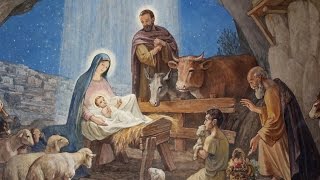 Funny how so many 'so called' Christians kneel and perform such pomp and circumstance every December 25th. All the beautiful Christmas decorations and wonderful seasonal songs are in fitting tribute to ...WHAT? Do any of the myriad of hypocrites and phony spiritual seekers ever actually read what the baby Jesus said as a man:

"And when the people saw him come they said 'All hail! Behold the king!' But Jesus answered not; he saw the money changers in the house of God, and he was grieved. The courts had been converted into marts of trade and men were selling lambs and doves for offerings of sacrifice. And Jesus called the priests and said 'Behold, for paltry gain you have sold out the temple of the Lord. This house ordained for prayer is now a den of thieves. Can good and evil dwell together in the courts of God? I tell you NO!'

And then he made a scourge of cords and drove the merchants out. He overturned their boards and threw their money on the floor. He opened the cages of the captive birds and cut the cords that bound the lambs and set them free. The priests and scribes rushed out and they would have done him harm but they were driven back; the common people stood in his defense."

To this writer the priests and scribes were symbolic of today's religious, political, and media hypocrites who flourish in great comfort and style. Jesus laid into them as well:

Putting materialism and crazy consumerism aside when each Christmas season is once again upon us, please focus on something else for a moment. Stating it succinctly, those who run our Military Industrial Empire have hijacked Jesus! They begin with the baby born in but a manger and snatch him right up until he is crucified. Even that aspect of his ending has been skewed.

The fools and hypocrites who run this empire and influence many of its religions will tell you that his purpose here on earth was to 'Die for your sins'. They go on to tell you how the Heaven after our death is all that counts etc etc. Yogananda, the great Hindu teacher who introduced yoga to the West and even taught it to Gandhi, revered Jesus as the Logos or The Christ. He revealed how this carnal existence is but a dream and the manner in which each of us acts and behaves in this dream is so ever important to what will follow us after we leave this plane.

Reading the New Testament carefully will instruct anyone who really cares that what Jesus stood for was unconditional Love and forgiveness ...and just as paramount: JUSTICE!

As the old saying goes: "Let justice prevail or may the heavens fall!"

{Philip A Farruggio is the son and grandson of Brooklyn, NYC longshoremen. A graduate of Brooklyn College ( class of '74 with a BA in Speech & Theater), he is a free lance columnist posted on World News Trust, Nation of Change Blog, Op Ed (more...)
Related Topic(s): Christian Values; Christianity; Christmas; Consumerism; Empire; Forgiveness; Jesus; Justice; Materialism; Media; (more...) Military; Prayer; The Real Reason Jesus Was Crucified; The Real Reason Jesus Was Killed, Add Tags  (less...)
Add to My Group(s)
Go To Commenting
The views expressed herein are the sole responsibility of the author and do not necessarily reflect those of this website or its editors.