Trump is not a deviation from Republican ideology or beliefs; he is their fullest flowering. He is not the party's nightmare. He is its id, the manifestation of its darkest impulses. 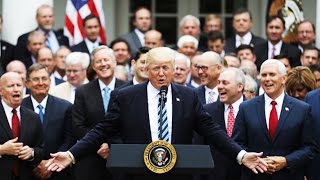 It's Political Messaging 101: You can't beat Trump by talking about him all the time.

We should be talking about our economic future, but all we're talking about our 45th president. Look at this chart, which shows the top story on social media accounts by social category for the first year (more or less) of Trump's presidency:

Stunning, isn't it? Trump dominates the media landscape like some paint-and-plaster Colossus, his conquering limbs striding from news cycle to news cycle.

I agree with Ezra Klein on at least one crucial point about this chart. (It's from Klein's piece, "Trump is winning.") The president is "setting both the terms and tone of the debate."

The Rest of the Story

When everyone is focused on our 45th president, how can Democrats hold your attention long enough to make the case that they will make people's lives better? Here's what that chart looks like if you take Trump coverage out of the picture:

Two stories seem to have staying power across all four categories: the Russia investigation, and healthcare. One of those stories involves Trump and the people around him, but doesn't address the issues that affect people's day-to-day lives. The other affects their lives -- and sometimes deaths -- directly.

Democrats have devoted a lot more attention to the first story, Russia, than they have to the issue of healthcare. Sixteen Democratic senators joined Bernie Sanders in sponsoring a Medicare For All bill, including most of the party's presidential candidates in that body. But the party is divided on the topic, as it is on other crucial economic issues.

The party's predilection for mingling with lobbyists and other high-dollar donors, as reported here and elsewhere, isn't helping to resolve its split. And so, leading Democrats and sympathetic pundits have been focusing on Trump's personality and the Russia investigation instead.

A Democratic email blast sent last month included the rather plaintive subject line, "Let's get into Trump's Twitter feed." Is that as high as the party now dares to dream?

But the Russia investigation is something of a Rorschach test. Many party loyalists see it as an open-and-shut case: Trump has treasonously conspired with a foreign power and must be impeached. I hate to be a killjoy, but that does not seem to have been confirmed by any independent investigation, including Robert Mueller's. It may be someday, but that's far from certain.

Related Topic(s): Impeached; Party Politics Democratic; Party Politics Republican; Rorschach; Trump Apologists; Trump Russia Connection, Add Tags
Add to My Group(s)
Go To Commenting
The views expressed herein are the sole responsibility of the author and do not necessarily reflect those of this website or its editors.