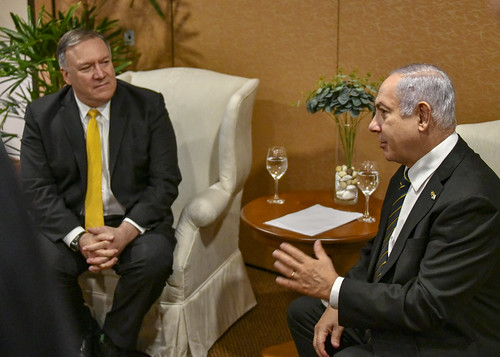 So now we have porcine Mike Pompeo, America's current Secretary of State, on a visit to the UK, assuring a group of British Jewish leaders in a closed-door meeting that the US would work to prevent Labour leader Jeremy Corbyn from becoming prime minister if his party were to win enough votes in the next national parliamentary election to get the opportunity to try and form a new British government.

In a recording leaked to the Washington Post, Pompeo assured a group of Jewish leaders in Britain yesterday that the US government would "push back" against Corbyn becoming prime minister in such a case, working behind the scenes to prevent a victorious Labour party from voting in Corbyn as Prime Minister.

In the British parliamentary system, the party with the most votes after an election, if it wins an outright majority, or, as the Conservatives did in the last election, a plurality of votes and then is able to successfully cobble together a majority by bringing in other parties, then can use that majority to elect a new prime minister. Normally the new PM is the leader of the party that won the most votes, but that need not be the case.

A questioner on the tape is heard asking Pompeo, "Would you be willing to work with us to take on actions if life becomes very difficult for Jews in the UK?" an obvious reference to a rabid ongoing campaign in the largely conservative UK media and among zionist groups in the UK to tar Corbyn as an anti-semite because of his outspoken defense of Palestinians under Israeli occupation.

Pompeo, obviously not aware he is being taped, appears to suggest in his answer on the leaked recording that the US would seek to prevent Corbyn from becoming PM. "It could be that Mr Corbyn manages to run the gauntlet and get elected," he says. "It's possible. You should know, we won't wait for him to do those things [presumably making life 'difficult for the Jews in the UK'] to begin to push back. We will do our level best. It's too risky and too important and too hard once it's already happened."

This an acknowledgment that the US would try to influence the selection of Britain's parliamentary leader is truly an astonishing statement coming from a top US government official, and particularly a secretary of state. I mean we all know that the US routinely messes with elections all over the third world, and even in European countries, but our leaders don't normally admit it, even in private, preferring to tout the US as a paragon of "democratic values."

Imagine if Corbyn were Prime Minister in 2020, and his foreign minister were caught on tape in the US telling a group of black leaders or Muslim leaders that his government would try mightily to prevent Donald Trump from winning re-election?

Related Topic(s): Election Rigging; Jeremy Corbyn; Secretary Of State Mike Pompeo, Add Tags
Add to My Group(s)
Go To Commenting
The views expressed herein are the sole responsibility of the author and do not necessarily reflect those of this website or its editors.