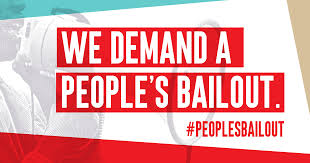 On this fifth Sunday of Lent our readings prepare for Easter by directing us to consider death and resurrection both politically and personally.

The readings are especially poignant and relevant at a time when as a people we appear to be in a cruel political captivity not unlike that of Israel more than 2500 years ago. Besides that, the loss of loved ones to the Coronavirus has brought into so many families the experience of Martha and Mary bereft of their beloved brother Lazarus who was so dear to their family's close friend, Jesus the Christ.

Our Own Babylonian Captivity

Today's first reading reminds us that we're like Israel during its Babylonian Captivity. The prophet Ezekiel addresses that latter situation right off the bat. His sixth century was the saddest of times for his people - the era of his nation's Great Exile. The Hebrews had been defeated and humiliated by Babylon (modern day Iraq). Judah's leaders and a large portion of its populace had been abducted to that enemy state. Jerusalem lay in ruins. The exiles felt as if they had been slaughtered culturally. They were far from home, controlled by foreign masters, and apparently abandoned by God.

Like his audience, we're undeniably in the grip of cruel masters. During the COVOD-19 crisis, our version of captivity has our "public servants" treating us as if we were aliens in a Babylon that belongs to them and their rich donors. It's as if we were powerless defeated foreigners under their power rather than their employers. That's shown by the fact that they've dealt with the Coronavirus problem not by improving the people's healthcare system. Instead they've used the crisis to take care of the bank accounts of their sponsors who end up being our captors! In other words, we're the victims of a coup by the corporate elite and their congressional minions. There seems no way out.

That's the way Matt Stoller, research director at the American Economic Liberties Project, has describe d the bailout. His recent column for the Guardian is entitled "The coronavirus relief bill could turn into a corporate coup if we aren't careful."

According to Stoller, suddenly, under the pressure of COVID-19 congressional representatives on retainer from corporations like Boeing and Citibank found the very money they claimed wasn't there when it came to providing for us the same healthcare that every other industrialized nation offers taxpayers. Suddenly that money materialized out of nowhere, but not to cure the failed "healthcare market," but to heal instead their failed stock market and to save a moribund capitalism.

Predictably, they'll use that money not principally to address COVID-19, but to eventually buy up distressed businesses and taxpayers' homes. (Stoller warns that we may end up with just three retailers in this country: Amazon, Walmart, and Costco.) In the process, they'll gift dividends to their investors and bonuses to their CEOs. They'll also further consolidate their control of the nation's and world's economy. It's pure Disaster Capitalism as described so well by Naomi Klein. Absolutely no one asked legislators, "How are you going to pay for the generosity you've just extended to your corporate sponsors?"

Meanwhile, "our" representatives have given highly conditioned, means-tested crumbs to the rest of us. It's what the Mafia does. As Jimmy Dore says, they rip off the ones who pay them protection money all year. Then give their proteges a turkey at Thanksgiving - and expect gratitude in return.

I mean, none of what the Congress passed showed any awareness of dealing directly with the actual problems facing our nation in the face of COVID-19. They've done nothing to immediately address the lack or face masks, hospital beds, or respirators, - much less that universal healthcare insurance which our situation absolutely cries out for.

No, healthcare and all the rest have been left to the mechanisms of trickle-down economics and private insurance companies. The implication is that if we take care of Wall Street first, our immediate healthcare needs will somehow be met one day when private enterprise finally decides to produce what we so desperately need right now. We've seen this horror movie before.

And just watch the dead bodies pile up while we wait. It's already happening. And the crisis hasn't nearly peaked.

Related Topic(s): Economy; God; Government; Healthcare; Jesus; Mafia; Parable; Prophet; Resurrection; Sunday, Add Tags
Add to My Group(s)
Go To Commenting
The views expressed herein are the sole responsibility of the author and do not necessarily reflect those of this website or its editors.